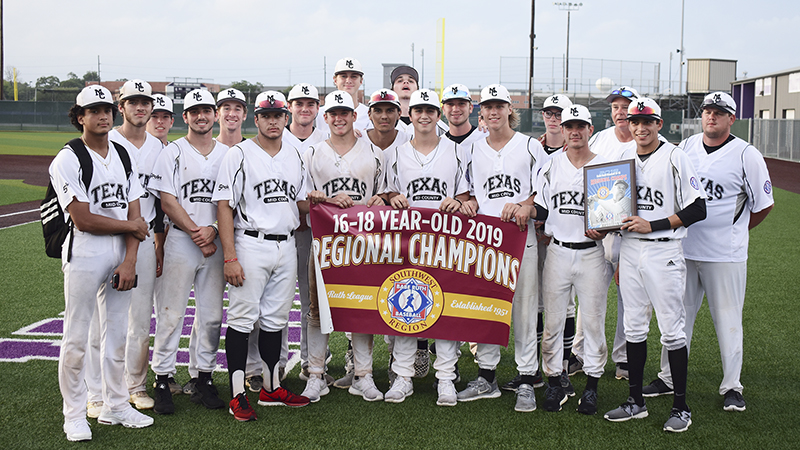 Mid-County holds the Babe Ruth 16- to 18-year-old Southwest Regional championship banner and plaque following a 7-1 win over Del Rio on Sunday in Port Neches. The game started in Nederland but was moved due to remnants of Tropical Storm Barry. (I.C. Murrell/The News) 7-14-19

Mid-County led Del Rio 3-0 with two outs in the top of the third inning at Nederland High School and finished the inning at Port Neches-Groves High School 2 hours, 14 minutes later.

On- and off-again rain soaked Nederland’s Metreyon-Delahoussaye Field too much to continue the Babe Ruth 16- to 18-year-old Southwest Regional championship there. At 5:58 p.m., the apparent remnants of Tropical Storm Barry let up enough for Mid-County to resume what turned out to be a 7-1 rout Sunday.

All told, the game that started at 2:24 p.m. in Nederland finished at 7:05 p.m. in Port Neches, still a quick game given the long delay. The result for Mid-County (9-0) is an estimated 10th trip to Senior Babe Ruth’s world championship tournament and a shot at a second title in three years.

Peyton Miller did not let the change of location break his concentration. The right-handed Kelly Catholic graduate held Del Rio to one run on four hits in six innings to pick up the win.

Cade Holyfield faced four batters in the seventh and struck out two to close out the day.

Mid-County raced to a 2-0 lead thanks to a dropped catch at right field on Adam Roccaforte’s at-bat and Rene Cunningham’s one-run single. Kamden Grant reached on an error in the second inning and scored on a error by the pitcher.

Rain forced a 21-minute delay four pitches into the third inning, but on the first pitch back, Cunningham (2 for 4, two RBI) laced another single. Two outs and 14 minutes later, the decision was made to move the game from the grass Nederland field to PNG turf.

Miller was perfect through the first two innings and gave up a single to Imana Falcon to start the third. Falcon went 2 for 3.

Mid-County added three runs in the fourth thanks to Roccaforte’s bases-loaded walk, Brian Davila’s run on a wild pitch and an error on Cunningham’s third at-bat that allowed Landon Hiltz to make it 6-0. Michael Falcon knocked a single to deep right to drive Diego DeLeon across the plate for Del Rio in the bottom of the inning.

Roccaforte (two RBI) singled to start the seventh and scored on a Preston Johnson grounder.

Mason Brown also singled for Mid-County in the fourth inning. Isaias Reyes had a single in the sixth for Del Rio.

Isaiah Ochoa worked the first 2 2/3 innings and struck out one while allowing a hit. His pitch count reached about 90, including work he did in Del Rio’s 11-9 come-from-behind win over Northwest Arkansas earlier Sunday. Del Rio scratched seven runs in the fifth and three in the sixth to erase a 9-1 deficit.

The Babe Ruth World Series is Aug. 2-9 in Mobile, Alabama, home to the defending championship team.