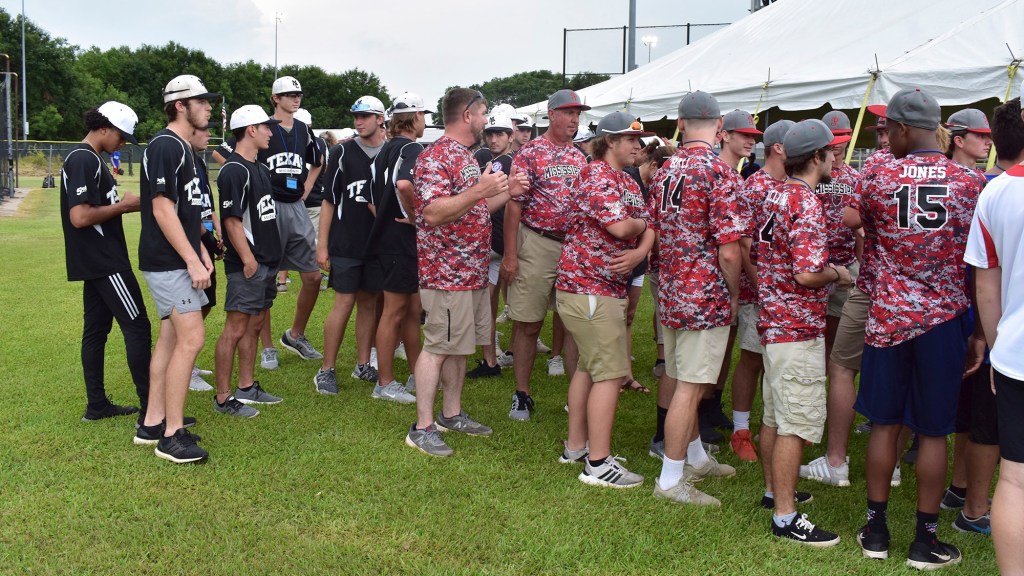 Players from Mid-County and Petal, Mississippi, line up to be served during a picnic just outside Nederland High School’s Metreyeon-Delahoussaye Field on Thursday. (I.C. Murrell/The News) 7-11-19

NEDERLAND — Northwest Arkansas manager David Rook was not overly concerned about the threat of a tropical storm or hurricane when his team left for Southeast Texas.

“When we first saw [the forecast], we saw it as a regular storm, so it didn’t escalate until we actually got here,” he said. “We’re not storm people, so we really don’t know the magnitude of a hurricane.”

Turns out, forecasts of Tropical Storm Barry hooking away from the Texas-Louisiana border bode well for the five teams that will compete in the Babe Ruth 16- to 18-year-old Southwest Regional tournament, which is scheduled to begin today at Nederland High School’s Metreyeon-Delahoussaye Field. In fact, the players and coaches were treated to a picnic under a tent just outside the ballpark and an ensuing skills competition including a home-run derby.

Host team Mid-County has prepped for the Southwest Regional with games at Lamar and Rice universities, winning a tournament at the latter on Sunday. Lamar was the site for the Perfect Game Owl Shootout last week.

“They were really competitive,” Mid-County manager Ben Rogers said. “They swung the bat well. It was a wood-bat tournament, so we’re happy to be back with the aluminum bats. The pitching was well. We threw the ball well. A couple of kids didn’t have their best stuff, but they battled through it.”

The Mid-County lineup from top to bottom, led off by Nederland graduates Landon Hiltz and Adam Roccaforte, had hot bats in Houston, Rogers said. Rogers also liked the team’s speed in baserunning.

For recent Hardin-Jefferson graduate and incoming Coastal Bend College player Justin Smith, it’s a chance to not have to worry about balancing hotel or host family stay with tournament play.

“It feels like a normal high school game, just away from your house, and you just have a normal routine,” he said. “You ain’t got to rely on anybody to bring you to a game. You can go on your own time.”

About the only Plan B that’s been discussed should bad weather rain on Babe Ruth Baseball’s hit parade is whether to move the games to Port Neches-Groves, which has a turf field.

Mid-County is the host team and looking for redemption after finishing second to the Alabama Rawdogs of Mobile.

“We went out sad,” Smith said. “It ain’t going to happen this year. We’re coming stronger, and we’re coming for the team that beat us.”

Except that Alabama is not represented in Nederland. Mobile is hosting the 16-18 World Series, Aug. 2-9, and a local team is expected to compete there. Mid-County won the 2017 World Series in Ephrata, Washington.

Fayetteville-based Northwest Arkansas expects to deliver a strong performance with a number of players that competed in the state’s 6A state tournament in May. Fayetteville’s neighbor to the north, Springdale, is home to runner-up Har-Ber, while teams from nearby Bentonville, Rogers and Fayetteville also made the playoffs.

“This is the sixth year of our coaches being the same, so we’ve been watching ourselves and changing with the way they change,” Rook said. “We ‘bout got it figured out, I hope.”

Mid-County and Ascension Parish, Louisiana, will face off in the opening-round game at 1 p.m. today. Northwest Arkansas and Del Rio will square off at 4 p.m., with the winner of the first game taking on Petal, Mississippi, at 7 p.m.