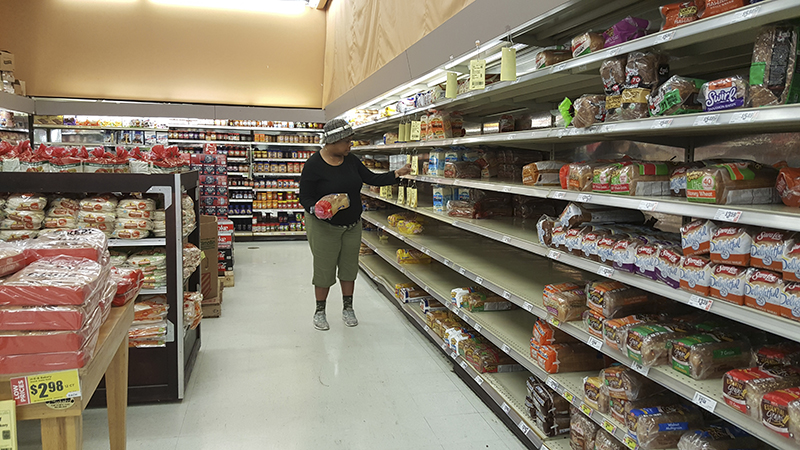 Denise James picks up a loaf of bread at H.E.B. on Thursday. Many stores saw a rush on storm supplies such as water and bread earlier this week. (Mary Meaux/The News)

People took to social media over the past few days showing long lines and near bare shelves as they packed stores for last minute hurricane supplies.

During the height of the quest for supplies, Bruce’s Market Basket in Groves saw 18 pallets of water fly off the shelves, manager Jacob Landry said on Thursday. They also ran out of bread.

Bread was one of the items on Denise James’ grocery list Thursday at H.E.B. in Groves. The bread selection was sparse, but James found what she was looking for while shopping with Gayla Day.

Tuesday, she said, it was “crazy” at Walmart.

“It ran out the first time and we had a truck come in just in time to fill it up again,” Clawson said. “It was still busy early today.”

He described the day as “chaotic.”

But this wasn’t his first time with pre-storm customers seeking supplies — he saw it with Hurricane Harvey, he said.

Tropical Storm Barry is expected to strengthen to a category one hurricane before making landfall Saturday in south central Louisiana. Earlier this week, there were many unknowns and parts of Texas were in the “cone of uncertainty” — the possible area where the storm would make landfall then the path shifted.