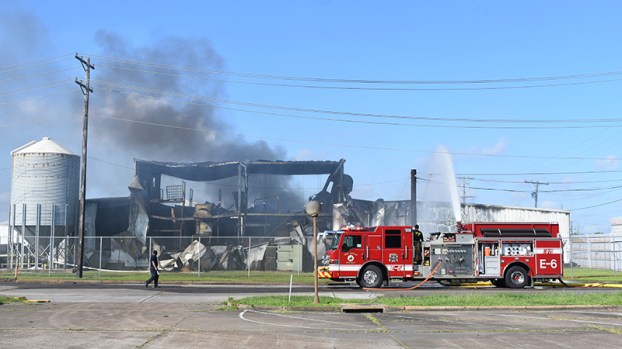 The investigation into the fire that destroyed a downtown Port Arthur warehouse continued Wednesday, though in a different stage.

Port Arthur Fire Marshal Paul Washburn said the on-site investigation of the fire at Worldwide Sorbents Inc., which is on Lakeshore Boulevard, was complete.

The fire at the Worldwide Sorbent Products Inc. on Lakeshore Boulevard came in around 2 a.m. and by late morning the fire was under control. Then came the task of extinguishing the hot spots.

The roof of the large building that housed the warehouse, manufacturing area and office was partly caved in, making it difficult to extinguish all of the hot spots, some of which smoldered under pieces of the roof.

A fence at the back of the warehouse, adjacent to a large parking lot at Fourth Street, was torn down in places so firefighters could access the property and the “all clear” was later given.

PAPD searches for armed robber of The Blue Store

Port Arthur Police are searching for a man who robbed a store on Seventh Street in broad daylight on Wednesday.... read more