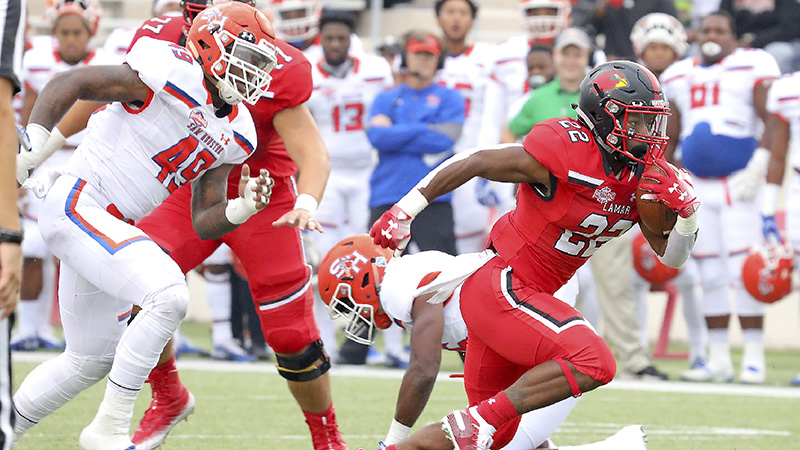 The preseason all-conference teams are voted on by each of the league’s head coaches.

Crosley is coming of a 2018 season that saw him finish fifth on the team with 58 total tackles on his way to second-team postseason All-SLC recognition. The DeRidder, Louisiana, native ranked among the league leaders posting 9 sacks and 16.0 tackles for losses.

Crosley posted one of his best individual performances in the second half against Stephen F. Austin. After the Cardinals jumped out to a huge lead, SFA was attempting to rally late in the contest, but Crosley managed to come up with a key stop on several third downs forcing the Lumberjacks to punt the ball away. Crosley ended the game with 3.5 tackles for losses – including 1.5 sacks – two quarterback hurries, a forced fumble and recovered a fumble.

Wanza returns from a sophomore season that saw him become one of the league’s top weapons. A member of one the nation’s top 1-2 punches in the backfield (A.J. Walker), Wanza carried the ball 110 times for a team-high 683 yards (6.2 ypc) and three touchdowns. He produced those numbers despite missing three games due to injury. Wanza averaged nearly 76 rushing yards per game last season.

Wanza saved his best performance for one of the toughest opponents of the season. Just a week after the team’s thrilling victory over Incarnate Word, Wanza helped lead the Cardinals to an upset victory over nationally ranked Sam Houston State with 15 carries for 168 yards and two touchdowns.

As a team, the Cardinals ranked among the Southland leaders averaging nearly 242 rushing yards per game in 2018.

Martinez is entering his third season with the program and is coming off a year that saw him lead the team with 69 points. Martinez was 8 of 13 (.600) on field goals with a career-long 48 yarder against nationally ranked Nicholls. The Huntsville native placed his name in the school’s record books when he recorded a perfect 10 of 10 on extra point tries against Kentucky Christian.

The Cardinals trio was key in the program’s six-game win streak to close out the 2018 campaign which earned LU its first NCAA FCS Playoff appearance in program history. The Cardinals finished the year with a 7-5 (.583) overall record and enter the upcoming season looking to become the first Cardinal team since the 1966 and 1967 seasons to record back-to-back winning records.