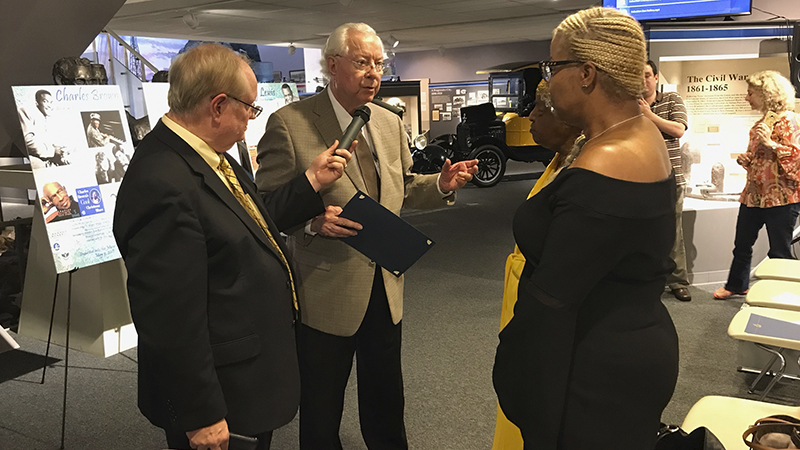 Port Arthur Historical Society President Sam Monroe speaks with visitors at an induction event for the Museum of the Gulf Coast in 2018. (Ken Stickney/The News)

The Museum of the Gulf Coast set record numbers for attendance in 2018. Expect something bigger this year.

The half-year mark for the museum showed 9,897 people have visited the downtown Port Arthur museum, located at 700 Procter St., through June 30, the end of the first six months of 2019.

“Somehow the museum fell off their radar,” Neal said Tuesday. “Now they are coming back and they are bringing their friends.” 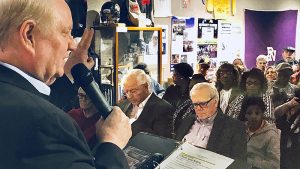 Museum Director Tom Neal speaks at the inductions of C.J. Chenier and Clifford Antone into the Museum of the Gulf Coast in January. More than 230 people attended. (Ken Stickney/The News)

Neal said the museum staff tracks Facebook likes and Trip Advisor in gauging interest in the museum. Thus far, he said, he sees the museum as the top tourism attraction in the area, ahead of Sabine Pass Battleground Historic Site, Sea Rim State Park and the Our Lady of Guadalupe Shrine. He said the museum’s appeal is rated 4.8 of 5.0 by visitors.

“It’s all about the positive message we have here,” he said. “That brings them in.”

The top attraction in the museum is the Janis Joplin exhibit, which brings national and international visitors as well as locals. So does the Robert Rauschenberg gallery, which houses original work by the abstract impressionist. Both celebrate international artists and home-grown talents.

Neal said he expects brisk traffic for the second half of 2019, too, with attractive art shows, family fun days and more events scheduled.

“We’ve been working with the Boy Scouts and we’ve been receiving bus tours from Harris County,” Neal said.

One woman visited with a Harris County tour, then signed up two other organizations to which she belongs for visits.