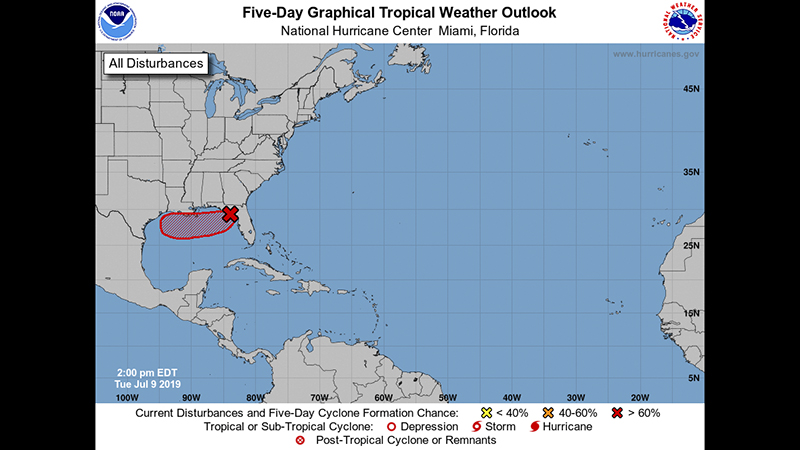 (From the National Weather Serivce in Lake Charles)

Local officials said Tuesday they were keeping an eye on the tropics as an area of low-pressure emerges into the Gulf of Mexico.

And while there are many unknowns with the possible, looming weather event, environmental conditions were expected to be conducive for tropical storm formation and development over the next few days.

With that said, local officials were preparing their cities and asking citizens to be ready as well.

Groves Fire Chief Dale Jackson, who is also the city’s emergency management coordinator, said city departments were preparing as if a storm is approaching and will affect the city.

Some preparations include checking generators and trying to finish up some of the continuing street projects.

His advice to residents: Be prepared. Make sure you have supplies for five days, including batteries, a full tank of gas, medications filled— these are tasks you don’t want to be doing at the last minute. If the possible storm doesn’t affect the area, then you are ahead of the game, he said.

Nederland leaders were also urging citizens to be prepared and they are preparing as well. The city street department crews were tasked with ditch maintenance for the next several days, according to an advisory from the city. They are also asking the public’s help by removing any trash and debris in their ditches.

“This is the second week of the month, so trash trucks are working on the part of town north of Nederland Avenue,” the advisory said. “City trash trucks continue to work on overtime to collect the trash and debris from previous weather events; if there has been a delay in removing a trash pile, please contact the Solid Waste Department at 409-723-1541.”

For other storm-related questions in Nederland, contact the city manager’s office at 409-723-1503.

In addition, Port Arthur is asking its citizens to keep ditches and culverts along their property lines free of trash and debris to aid in the drainage of neighborhoods.

Keeping up with the weather

Local emergency management officials were also planning to take part in a conference call with the National Weather Service on Wednesday morning as well as afternoon for updates on the storm threat.

A tropical depression was likely to form by late Wednesday or Thursday as the system moves westward across the northern Gulf of Mexico, according to NWS information.

An Air Force Reserve Unit reconnaissance aircraft is scheduled to investigate the low pressure area on Wednesday, if necessary.