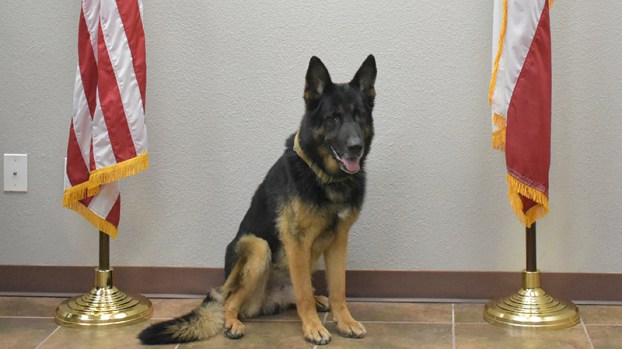 One of Port Arthur’s finest is hanging up his badge after nine years of service with the police department.

Rocky, an 11-year-old German Shepherd, has been with Det. Rogelio Meza for about five years and another four years with a different officer. City Council members recently authorized Rocky’s retirement and transferred ownership to the personal care of Meza.

The black-and-tan dog is a dual purpose K9, meaning he worked patrol with Meza, where he performed handler protection and suspect apprehension, as well as worked as a drug dog.

Rocky enjoyed a storied career as an officer. His handler, now his owner, said his biggest bust was when they assisted with Beaumont Police Department on the seizure of about six kilos of cocaine with a street value of about $250,000.

“And he caught a burglar at 100 Gulfway Drive. (The suspect) had broken in through the rooftop and was found hiding inside a cabinet, the cabinet under a copy machine,” Meza said.

Rocky, he said, is great with kids and took part in community programs and went to schools.

Retirement for Rocky means a change in lifestyle.

So, while he won’t be clocking in at work,Rocky will be hanging out with his family at home. Meza’s family has a small dog that keeps Rocky young.

“They run non-stop all day,” he said with a laugh.