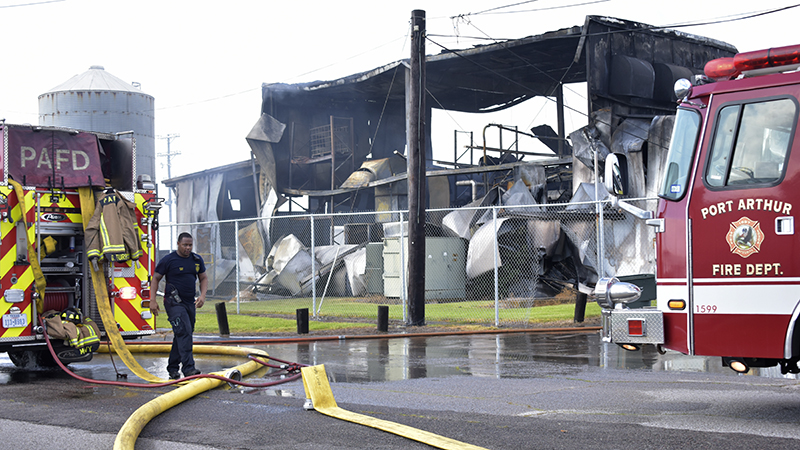 A Port Arthur firefighter at the scene of a warehouse fire at Monday morning at Worldwide Sorbent Products Inc. (Mary Meaux/The News)

A major fire ignited at a downtown warehouse early Monday was extinguished and area power restored by 3 p.m. Monday.

Port Arthur Deputy Fire Chief Richard Havens said the Port Arthur Fire Department and the federal Bureau of Alcohol, Tobacco, Firearms and Explosives were investigating the fire’s cause. ATF is involved because this was a large commercial fire.

A fire marshal was to remain on site overnight to keep watch in case the fire reignites. 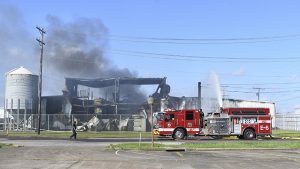 The fire at the Worldwide Sorbent Products Inc. on Lakeshore Boulevard came in around 2 a.m. Monday and by late morning the fire was under control. Then came the task of extinguishing the hot spots.

The roof of the large building that housed the warehouse, manufacturing area and office was partly caved in, making it difficult to extinguish all of the hot spots, some of which smoldered under pieces of the roof.

A fence at the back of the warehouse, adjacent to a large parking lot at Fourth Street, was torn down in places and the plan was to bring in heavy equipment to move around some of the collapsed structure. That proved unnecessary.

A City of Port Arthur gradall, or excavator, was used to partly knock down a wall and firefighters used hand lines to extinguish hot spots.

The building was deemed a total loss. 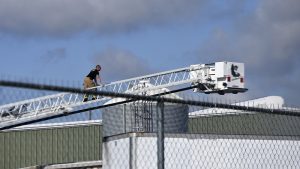 A Port Arthur Fire Department official surveys the condition of the warehouse after the blaze at Worldwide Sorbent Products Inc. on Lakeshore Drive was under control on Monday. (Mary Meaux/The News)

The blaze was large and police cordoned off several blocks around its perimeter, including barricades on Houston Avenue near the Port of Port Arthur offices. Larry Kelley Jr., executive director of the Port, said the fire did not affect Port operations, as there was an alternate way to allow vehicular traffic in and out.

Power was shut off to Port Arthur City Hall, municipal court, police and fire departments offices and the U.S. Post Office with some of the offices working on generator power for a portion of the day. 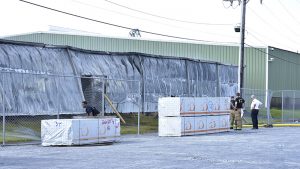 Port Arthur firefighters take down a fence to gain entrance to Worldwide Sorbent Products Inc. to work on hot spots in the warehouse on Lakeshore Drive on Monday. (Mary Meaux/The News)

Worldwide Sorbent Products Inc. provides oil spill cleanup services. A July 16, 2010 Port Arthur News story tells of how WSP was one of the local businesses working on the BP Oil Spill Disaster in the Gulf of Mexico, sending in 35 trucks of materials per week for 80 days.