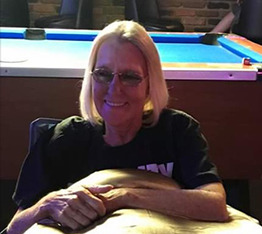 Paula Sue Deckard, 62, of Groves, Texas passed away on Thursday, July 4, 2019 at her home surrounded by her loving family.

She was born on December 12, 1956 to her parents, Roger Keeney and Roselin Grudier Keeney in Belle, West Virginia. Paula has been a resident of the area for most of her life, she graduated from Port Neches-Groves High School in 1975. She retired as a bartender after 30 years, she worked at Ember’s Lounge, R Bar and Jakes.

Paula is survived by her son, James Wactor, Jr. of Groves and his father, James Wactor of Nederland; her step-daughter, Amber Deckard of ; her mother, Roselin Keeney Phillips of Groves; her sister, Roxy Sparrow of Port Neches and her brother, Cameron Keeney of Bridge City along with several nieces and nephews as well as her good friends.

The family has chosen to honor her wishes of cremation with no services planned. Arrangements for cremation are entrusted to Clayton Thompson Funeral Directors in Groves.