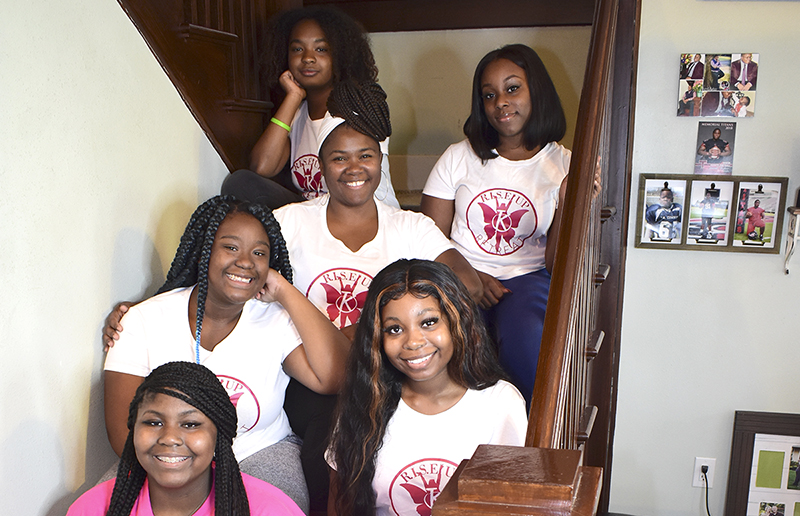 Kisha Simmons remembers being “that teen girl” — one who needed someone to show her “the way.”

One of the most impactful people in Simmons’ life, however, came her way in second grade. It was her teacher at Franklin Elementary School, Linda Batiste.

“What she would say to me is, ‘Smile, girl! You are so beautiful,’” Simmons recalled. “That would help me push through things I was going through at home she was not aware of.”

Now 38, Simmons, aka Coach K, is making an impact on the lives of teens across Texas as founder and director of an organization called Teen KICK, open to girls going into the sixth through 12th grades. The acronym KICK stands for four pillars:

“One of the biggest struggles teen girls face today is comparing themselves not only to the girls they are with in school, but also what’s going on in social media,” Simmons said, explaining the third pillar. “Obviously, we want to teach them not to compare to anyone else, but be exactly who God created them to be.”

Her motivation for Teen KICK stands for being “that” girl who needed someone to guide her.

“Without Teen KICK, many teen girls would feel lost and without someone with whom to share their problems,” recent Memorial High School graduate Pilaur Williams said.

“They would be doing things by themselves without having anyone to talk to about it and anyone to share with, without being judged. I feel like being able to talk to Coach K and coming in contact with a lot of different girls brings some kind of security to some other girls that they might need.”

For the past two years, Teen KICK has held a summer retreat called RISE UP — RISE meaning “Redeem, innovate, sacred and empower.”

The first retreat drew 28 girls to the Lasker Inn in Galveston, and the second, held for four days earlier this month, attracted 60 girls to the Jordan Ranch in Schulenburg, located midway between San Antonio and Houston.

RISE UP received a big assist from the Moody Garden Foundation in the form of a $35,000 grant. Simmons, who had never written a grant before, used the money to fund scholarships for interested young ladies to the retreat.

“What I enjoy the most about being in Teen KICK is the different topics we talk about with each other, getting to connect with the different girls and seeing how we can relate on so many different things, seeing we are all the same,” said Jakaila Neal, 18, one of Williams’ fellow classmates. “Even though being in different situations, we go through the same things.”

Williams, who will turn 18 on July 19, learned about Teen KICK from Memorial journalism teacher Nichelle Thibodeaux, a media specialist for the organization. Williams was a member of the student group “Ladies of Memorial” when Simmons paid them a visit.

Every month, Teen KICK enjoys that sisterhood with meetings to cover a different topic. The group focused on mental awareness in May and will discuss social service in July.

“It’s a social service challenge,” Simmons said. “This is where we’re challenging them to be active within the community. Teen KICK is not just in Port Arthur.”

Girls from Houston, Austin, Dallas, Texas City and even Covington, Georgia, participate in Teen KICK activities. Simmons, who lived in New York before moving back to Port Arthur, wants to take her ministry global, adding people have told her they would like for Teen KICK to be established in the United Kingdom and Canada.

“It’s great having a connection with different girls from different areas, get to know their backgrounds, but still relate and talk to them about the same things,” said Mercedes Graham, 18, another recent Memorial graduate.

Covington resident Aileena Lewis, 16, enjoys a special connection to Teen KICK — Simmons is her aunt. She made it to the last day of RISE UP after missing an earlier flight from Atlanta.

“On the last day, we did a lot of activities. I danced around and met new girls.”

“We shared, like, things that go on in life and like how we get through things,” said Rocquel Guidry, 15, a sophomore at Beaumont ISD’s Early College High School. “I like being able to socialize. Normally, I don’t socialize with a lot of people, but there it felt like I could fit in be able to talk to different people.”

RISE UP benefited Rocquel in more ways than one.

She received quite a pleasant surprise in meeting a cousin there for the first time. Also, she heeded a call from the one of the camp’s guest speakers to “seize the moment” while on a church trip to New York.

“I went to the Apollo and they asked if I’d volunteer to go up, and I did and I sang in front of people,” she said.

Simmons’ work with Teen KICK has earned her a Humanitarian of the Year honor from the Black Girl Excellence Awards at the University of Houston in March.

It’s just the latest of accomplishments for the 1999 Lincoln High alumna, who earned a bachelor’s degree in fashion design and merchandising from Wade College in Dallas and a master’s in psychology from Virginia-based Regent University.

She worked as a senior manager for Levi’s, traveling from New York to San Francisco, and she’s also published two books — the first, “Texas in the City,” about her move from Texas to the Big Apple, and the second a devotional called “Know the Power of ‘I Am.’”

Her psychology degree allows her to work as a teen life coach and devote to Teen KICK full time.

On July 27, teen girls and boys can listen to her message during the “Living My Best Life” youth conference at Greater True Vine Church, 4004 Memorial Blvd., Port Arthur. The event is free.

“I came back to take care of my grandmother,” Simmons said. “Little did I know I was coming back to do in my community what I had to do in other places.”

She always has her second-grade teacher to thank for motivation.

“Having someone say something positive to me pushed me to not be the environment I was raised in,” she said. “I wanted to be a Ms. Batiste.”