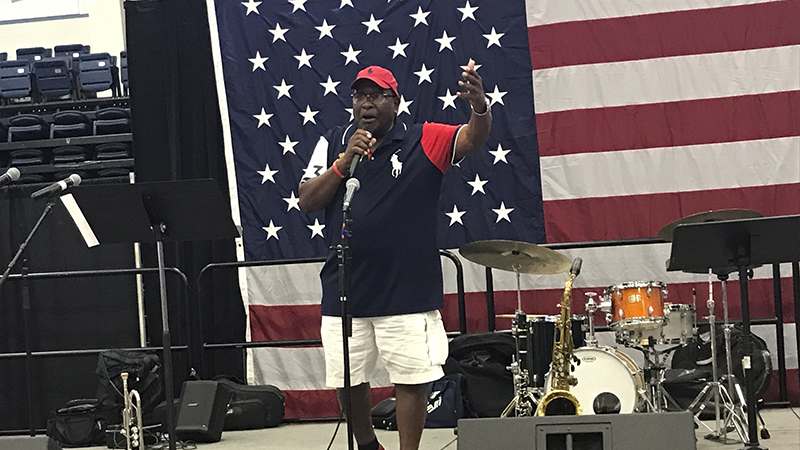 Mayor Thurman “Bill” Bartie’s first formal efforts as mayor involved preparing himself to take authority for the city in the event of a natural or manmade disaster.

Bartie, ushered into the Port Arthur mayor’s position Wednesday with an enthusiastic crowd’s welcome, met later in the day with the city’s emergency management team and with the city attorney to clearly understand his role, not only in the event of a hurricane but also in the event of a chemical or refinery disaster.

“I was briefed so I understand the parameters of my role,” Bartie said. That, he said, was important: From the outset he wanted to know his duties in case disaster “were to strike tonight.”

The mayor said Thursday he was preparing to meet Friday and next week with councilmembers and department heads to “know who they are” and what his responsibilities are in regard to their departments.

“I can’t micromanage departments,” he said, but he wanted to have a clear understanding of how the municipal government works or should work.

“Now the real work begins! We will be announcing the start of the Bartie 100-day plan in a few days,” he said at his swearing-in ceremony, offering some glimpses of his intentions without specific details.

Wednesday’s ceremony came at a special mid-morning meeting in the City Council chambers, where councilmembers formally accepted the voting results and City Secretary Sherri Bellard administered the oath of office.

Bartie told the 200-plus people in attendance that he needed to “step up my game” after first offering thanks to God for his win.

Bartie had claimed a spot in the runoff by finishing second among five candidates in the May 4 General Election.

“First, I want to thank God for his bountiful blessings of allowing me to become mayor of the great city of Port Arthur,” Bartie, an associate pastor, said. “That’s what I learned at First Sixth Street Baptist Church.”

The former District 8 justice of the peace also alluded to his past problems in public office. He served as a District 8 justice of the peace until he was removed in 2004 for a laundry list of findings, including using obscene language in the courtroom, failing to follow the law, showing incompetence in the courtroom and participating in corporal punishment in truancy matters.

His rollercoaster political career, he suggested, “prepared me to sit” in office as mayor.

Bartie pledged his loyalty to Port Arthur citizens, introduced his family to the crowd and said, “If I had the tentacles of an octopus I’d grab each of you and hold you to myself.”

Following the meeting, District 3 Councilman Thomas Kinlaw said Bartie’s elevation to mayor represented “a new day” for the city and a “great opportunity for the mayor to work with the council to get things done.”

As mayor, Bartie holds one of seven council votes.

Kinlaw said he hopes the mayor and council will continue to “get things done,” including executing on the city’s obligations for helping Motiva Enterprise revive downtown buildings for office space, fixing streets and drainage, all of which represent “testimony to Port Arthur wanting to change.”

“The people have spoken,” said District 2 Councilman Cal Jones, who was an unabashed supporter of Freeman. “They’ve decided to go in a new direction and as a city councilmember, I respect that decision.”

Jones said he embraces Bartie’s intention to present a united front with the council to make progress and said he would do his best to work with him.

He said he also cautioned the new mayor about political supporters who believe Bartie owes them something for their support.

“Some of those things won’t be delivered,” Jones said.

If everyone who told the winning candidate they voted for him actually did, Jones said, he’d have had “10,000 votes” instead of the 1,800 that put him into office.