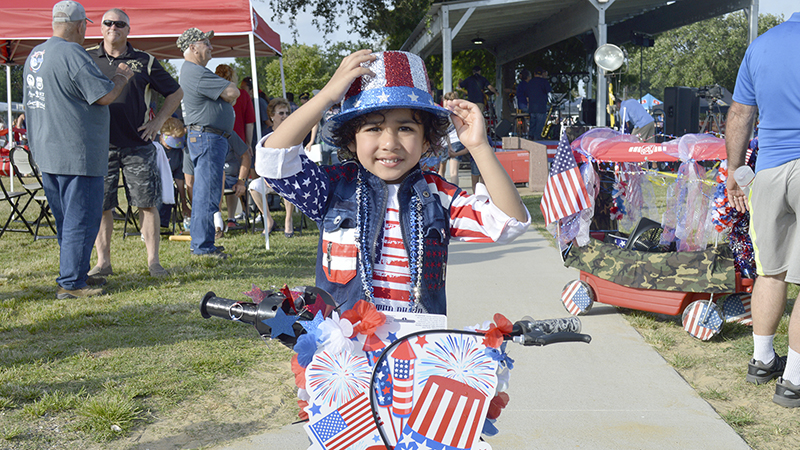 FILE PHOTO — Aaron Jasani stops for a photo after the Bike and Wagon Parade at Doorknobs Park for the Nederland Fourth of July event in 2016.

Parks and Recreation director Angela Fannette said favorable weather means the show will go on at Doornbos Park, as planned.

“We’re hoping for sunshine,” she said, and she’s got the weather forecasts to back that up. She said the grass is freshly cut at the park and absorbed Tuesday’s rain, which means the grounds will accommodate crowds without undue fear of puddles.

“But this is Southeast Texas weather so we will be ready for that, too,” she said. “We should have a great show.

The celebration starts at 5 and a bike-and-wagon parade will start at 6. A “Heroes Walk” follows 6:30 and popular band Still Cruisin’ will take the stage at 7. The Eighth Annual 4th of July Fireworks Extravaganza starts at 9.

Fannette said coolers and picnics are welcome at the park, but no alcohol or glass bottles are permitted.

She said for those who cannot make it can tune in to the music on radio 94.1.

Ten miles south and along the Seawall, Lamar State College Port Arthur, the city of Port Arthur and Motiva Enterprises have planned a family friendly evening that will include live entertainment and free ice cream. Food trucks will be present.

The Community Band of Southeast Texas will be on hand to provide entertainment as well as Port Arthur’s own Dwight Wagner.

The fireworks show starts at 9 p.m. just outside on the seawall. Bring lawn chairs and there is plenty of free parking.

The National Weather Service predicts moderate heat — the high will be about 90 degrees, forecaster Seth Warthen said — but humidity calls for “real feel” of over 100 during the day.

“It will be a good holiday to get outside,” Warthen said. “It’s summer, so a pop-up storm can happen, but we expect good conditions Thursday.”

Chances of rain are about 20 percent, more focused in the early afternoon.

“There will be some clouds all day, but that should clear up by evening,” he said.

He said Greater Port Arthur and Mid County should expect more of the same through Friday. Chances for rain should be higher on Saturday and Sunday.