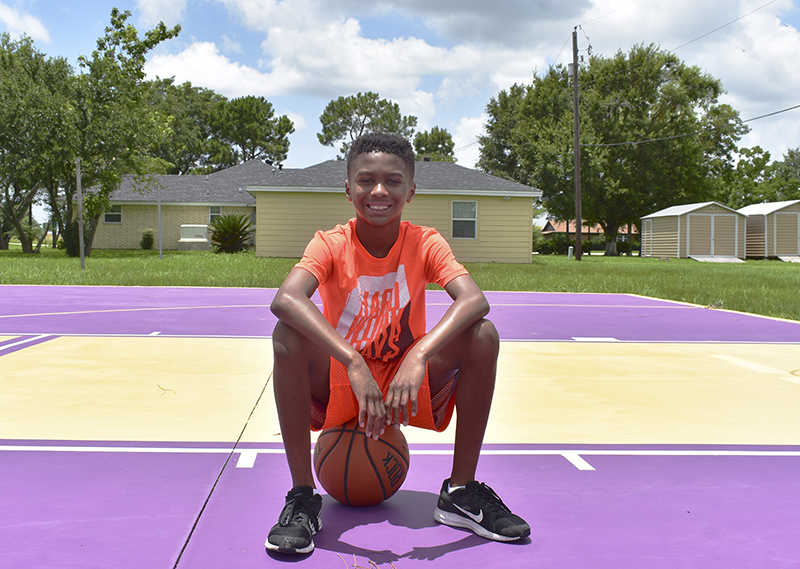 The visible half-court just off Texas Highway 73 is unmistakably purple and gold. 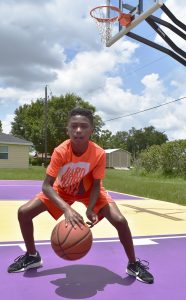 The purple and gold court in west Port Arthur is where Langston Jr., 11, hones his craft, like many basketball aficionados his age. He probably takes it more seriously than his cohorts, yet so many 11-year-olds have visions of being great at what they do.

“I just practiced a lot,” the youngster said. “I’m always working on my craft, getting better, doing whatever I can to get better, you know?” 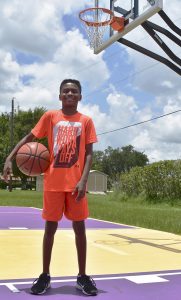 That’s simple enough for anyone to understand. But for an 11-year-old, Langston Jr. verbally breaks down the game in a way likely not taught to many high schoolers.

It begins with ball handling.

“That’s at least 45 percent of the game right there,” he said. “And then once I do that, I work on something I’m not as good at, which is getting to the basket and finishing, so I work on that as much as I do ball handling.”

One question is burning much more: Just how does someone Langston Jr.’s age figure ball handling to be almost half of the basketball game?

Yes, give Langston Sr., a Port Arthur lawyer, credit for sharing that tidbit.

A 1992 Lincoln High School graduate, Adams Sr. spends time talking about the game with his son, everything from the history and the present to the nuances that separate elite players from average.

“I think Langston is well advanced intellectually and mentally beyond his age,” the father said. “I think he’s become a student of the game, and not only is he a student of the game, he’s very passionate about the game, so we can sit back and talk in terms of not only goals but how to achieve those particular goals. That type of information is something I thought he can handle.”

The elder Adams has experienced basketball glory. As a junior, he played on Lincoln’s 4A state championship team, the sixth of seven UIL championships for the Port Arthur high school that merged with Thomas Jefferson and Stephen F. Austin to form Memorial in 2002.

“He was the one who really got me into the game,” Langston Jr. said. “You know, I wanted to follow in his footsteps, be the one to follow in our family’s legacy because we have a whole bunch of great basketball players in our family.”

His paternal grandfather, Levi Adams, played basketball and tennis at Lincoln and will go into the Prairie View Interscholastic League Hall of Fame for tennis later this month. He earned scholarships for both sports to Austin’s Huston-Tillotson University.

Langston Jr., who’s going to the sixth grade at St. Anne’s Catholic School in Beaumont, plays on an AAU team along with Joshua Coleman, known as H-Town’s Finest. Joshua is the son of Humble Summer Creek head coach Kenneth Coleman, who led Memorial to Port Arthur’s most recent state championship in 2018, ending a 23-year wait for the city.

Directors of elite camps across the U.S. have caught the attention of Langston Jr.’s game. He earned invitations to and attended the John Lucas Rising Stars Challenge in Houston and the NEO Youth Elite Camp in Cleveland, Ohio. Next up is a trip to the Beyond Basketball Junior All-American Camp in Atlanta in August.

According to an Instagram post, Beyond Basketball told Langston Jr. his “on court performance on the circuit and throughout the country have led [him] to be selected.” 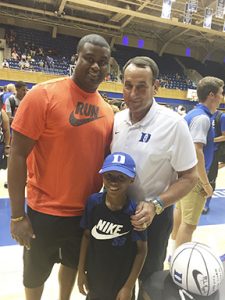 The camps don’t stop there. Langston Jr. recently attended an open camp at NCAA power Duke University, even getting to pose with Hall of Fame Blue Devils coach Mike Krzyzewski for a few photos.

While on Tobacco Road, both Adams Sr. and Jr. stopped by the University of North Carolina’s Dean Smith Center and ran into Kenny Smith Jr., son of the Tar Heels great and current NBA on TNT studio analyst.

“He wants to play in college for sure,” Langston Sr. said, his son listing Duke, Texas and LSU as his college teams of interest. “If the opportunity opens up, he might go pro [out of high school], but he’s realistic and knows the odds are stacked against him.”

Sure, Langston Jr. likes to hang with friends and play video games, just like a typical 11-year-old. His love for basketball is a little bigger, though.

Just as he breaks down his game from dribbling to shooting, his training schedule — usually fit for a prep star and older — stays pretty consistent as well.

“For me, it’s just wake up — back there, I have some workout equipment where I work out a little bit,” Langston Jr. said, pointing to an area near the living room, “then I go to Parisi, it’s a speed school [in Nederland and Beaumont], then I come back and go on my own court a little bit, come back, take a shower. Once I do that, we have to go to Kumon [a learning center], and that’s on Mondays and Wednesdays, come back, go on my court a little bit more, get back in time to eat, take a shower and go to bed.”

Langston Jr. may be at least eight years (or seven if the NBA reduces the minimum entry age to 18 by 2022) away from the league, but his basketball knowledge is already years ahead.

He knows how he got to that point.