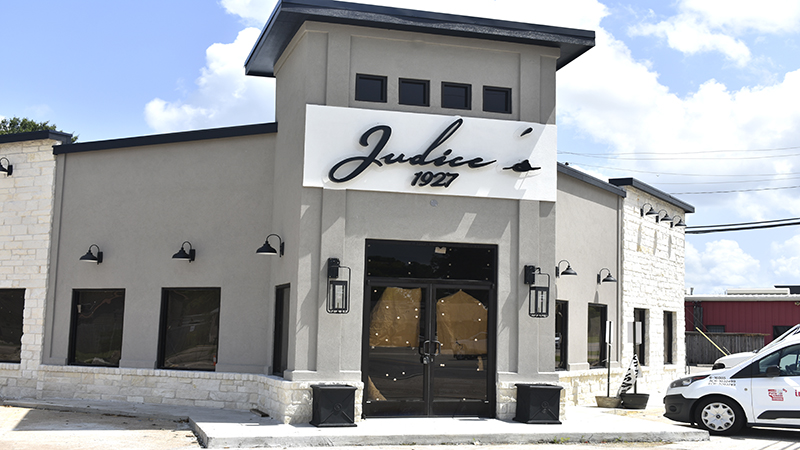 Judice’s will bring a mix of Cajun and French cuisines. (Mary Meaux/The News)

NEDERLAND — The Judice name has long been associated with just about anything Cajun, and Southeast Texans will soon have a chance to pull up to the table and experience Cajun and French cuisine.

“We’re not trying to run from our Cajun roots; we want to elevate it,” said Al Judice IV, who will soon open Judice’s on Nederland Avenue.

The new eatery will have the same Cajun staples the family is known for combined with the upscale.

“The plan is to elevate Cajun cuisine and add a little French cuisine and give people something we haven’t had in this area,” Judice said. “Anybody can copy anybody, but it’s a risk to do something different. That’s what makes the best break-throughs, in my opinion.”

He already owns Judice’s Cajun Café in Bridge City, which has been a successful venture. In the past year they have served over 200,000 customers — a pretty hefty figure when you realize this is a 75-seat diner.

And while Judice’s, located at the former site of Sartin’s, will continue to serve affordable meals like gumbo and fried shrimp, they will also offer fine dining — something for which there is a need in this area, he said.

“You will be able to order everything on the lunch or dinner menu but at night, the lights will come down a little more and we will try to bring a little bit of elegance to Cajun food,” he said, adding that French cuisine will take a spotlight.

The need for change

A savvy businessman, Judice has his finger on the pulse of what’s going on restaurant-wise. If you go to Louisiana you won’t see a bunch of shacks; there are crawfish farmers driving around in $100,000 pickup trucks, he said.

He often has lunch at the Bridge City diner but doesn’t feel comfortable sitting in a seat at the diner when there’s a line of customers waiting out the door — hence the reason he eats out a lot. This has brought him to Houston where he has taken a cue.

The days of the 500-seat restaurant are over; you can’t build a kitchen big enough and staff it well enough to be feasible. Judice is looking to have 120 to 150 seating and a quick turnaround from the kitchen to the table.

As for the upscale cuisine, Judice has hired a chef from Maine who is versatile, he said, as he described some of the dishes that are, as of right now, hush-hush.

Judice originally looked at property near the Jack Brooks Regional Airport. Then the former Sartin’s site came up for sale and Judice jumped on it.

The Nederland Economic Development Corp. awarded Judice a $100,000 incentive last July for business expansion and job creation — he’s looking at having about 50 employees.

Kay DeCuir, executive director of the NEDC, said the incentive would not be paid out until the restaurant has been open for 60 days and the business will be monitored by the NEDC for two years, keeping monthly tabs on the number of employees and more.

DeCuir said she is pleased to have the new restaurant in the city.

“To have another fine dining restaurant in Nederland is such a win for our city,” she said. “We have worked long and hard to bring in great restaurants to our area and will continue to do so.

“Judice’s will offer special Chef Nights throughout the year, which is sure to please with a twist for those who have never had this experience. Judice’s will bring many new jobs to Nederland and we are looking forward to his opening day.  Great food, a family atmosphere and so much more.”