Never took off: Airport commercial supporters will look anew for a fresh start 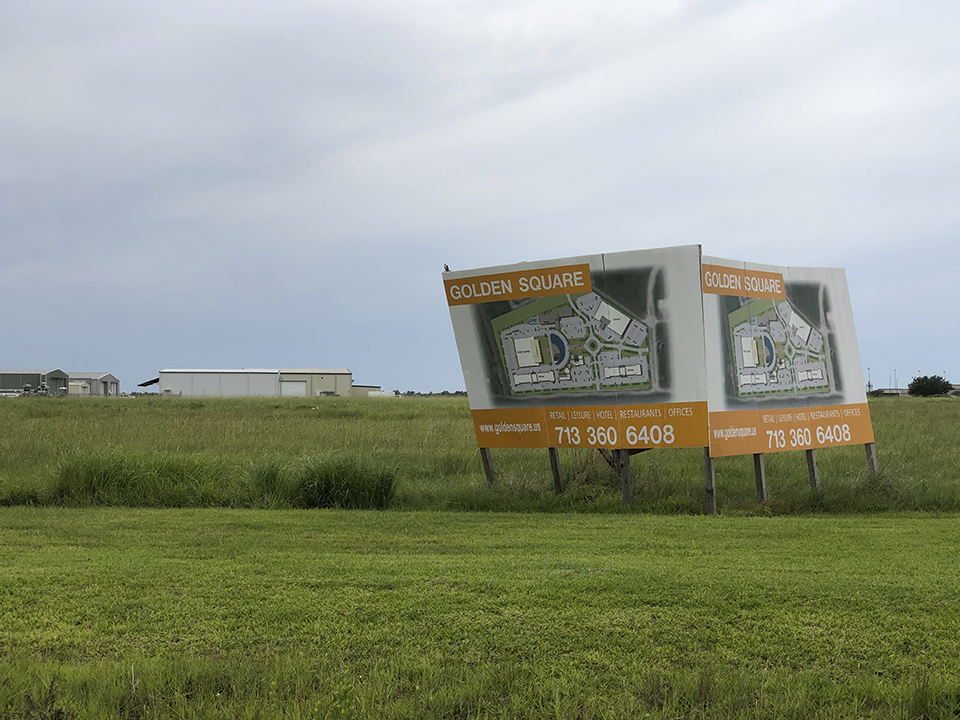 The property upon which an airport was planned to be built remains undeveloped. (Chris Moore/The News)

NEDERLAND — With the lease between Jefferson County and Houston-based GLOW Investment Group expiring, stakeholders last week were left wondering what happened and what is next as far as retail or commercial development at the airport.

During commissioners’ court last week, the commissioners voted unanimously to recognize the lease expired between the court and GLOW Investments, which was tasked with developing the land. County leaders said GLOW failed to reach certain benchmarks agreed upon in the lease.

In 2016, the county entered an interlocal agreement with the city of Nederland and the Nederland Economic Development Corp. in hopes of turning the land alongside Highway 69 into a commercial business area called Golden Square.

Plans for the development could still be found online at goldensquare.us last week.

Nederland EDC Executive Director Kay DeCuir said the development was supposed to be worth $83 million and rest on 27 acres. According to the website, the site was supposed to feature the following:

However, the project failed to yield any tangible results since 2016 when the agreement was signed. Skewed signs advertising Golden Square remained on the property, but the only work being done there is routine mowing.

During the commissioners’ court hearing, DeCuir said the holdup was due to the Texas Department of Transportation.

GLOW Investments wanted a road from the Highway 69 feeder road to the development. According to DeCuir, TxDOT wanted to add an acceleration and deceleration lane to ease impact on traffic.

While Jefferson County Judge Jeff Branick said he would personally call the agency to see if he could help expedite the process, multiple county officials do not believe TxDOT will approve the plans.

Precinct 2 Commissioner Brent Weaver said he believes it is time to move on, opposing DeCuir’s request to sign another lease with GLOW Investments.

“We need to look at other opportunities,” Weaver said following court. “This has been tied up since February 2016. I think I put it in pretty good perspective that is 1,222 days with no movement.”

Branick said he would not oppose signing another lease with GLOW, but wants to let others know the county commissioners would listen to other offers, as well.

“Ultimately, my goal is to assure that the property is developed and that there is some kind of income stream that feeds the airport,” Branick said. “We have to make sure we are doing what the FAA wants us to do to make it profitable and lessening the county subsidy of the airport.”

While DeCuir said Monday she wanted to sign a new lease with GLOW Investments, she said later she is ready to move forward however Jefferson County sees fit.

“Our next steps will be to work on a new Inter-local between the three entities and then work with developers,” DeCuir said. “We have always and will continue to be open to meeting with developers who want to bring new venues to our area.

“I am very optimistic and excited about the future of our town. Just because one door closes doesn’t mean others won’t open, or that a restart can’t make for a positive movement and a better future.”