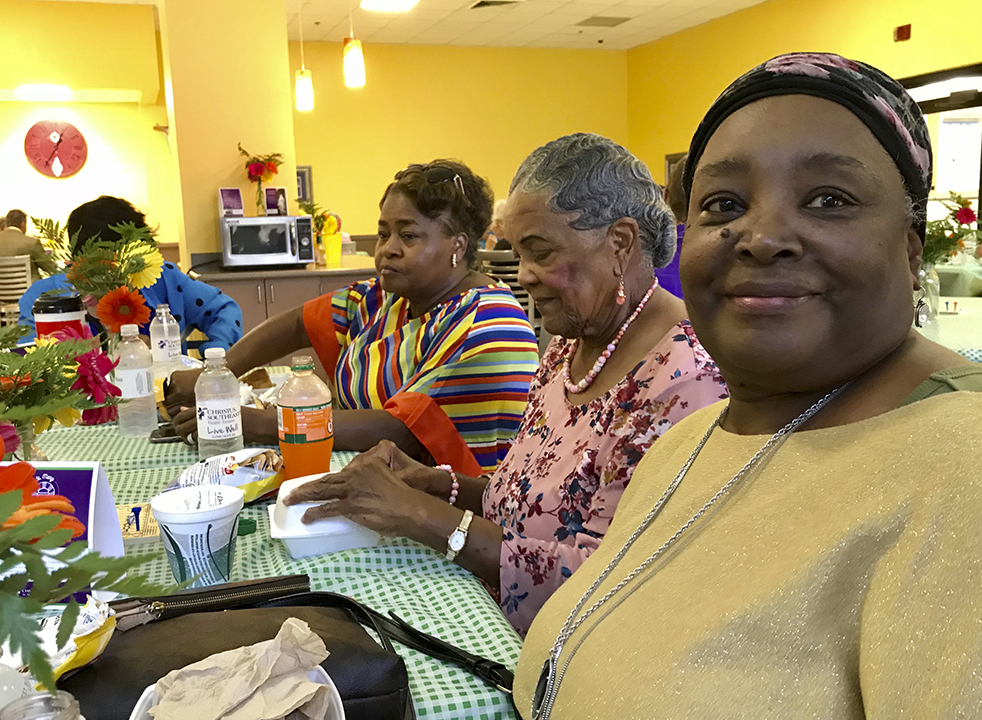 Nettie Scypion, a nurse on the overnight shift for most of her 33 years at St. Mary’s ate more breakfasts there than lunches. Her favorite offering: The bacon-and-egg sandwich. (Ken Stickney/The News)

Sheryl Dugas was no cook when she showed up to work at St. Mary Hospital 39 years ago. On Friday, she cooked the last St. Mary Burgers, a favorite offering for a half-century in the hospital cafeteria that satisfied patients, family and staff while luring the public in for meals.

Christus St. Mary President Ryan Miller confirmed that Dugas was the last in a long line of St. Mary cooks who created their own versions of the burgers for the last 50 or 60 years. Hers was first offered for public consumption in 2011. Over the years, he said, there were “variations.”

“It’s a half-pound, juicy and thick, seasoned,” Dugas said of her masterpiece burger.

She used simple kitchen ingredients: garlic, onion, black pepper and a “little cayenne.” When they started to offer it at St. Mary’s cafeteria, she said, the line went out the door. 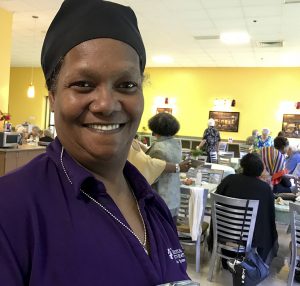 Sheryl Dugas, who has worked 39 years at St. Mary’s, is credited with creating the last version of the St. Mary Burger. (Ken Stickney/The News)

The kitchen used to be open seven days, but burgers were not served every day. The burger meal included the burger, fries and a drink for $5.50, she said.

On Friday, the burger, chips and bottled water were offered for $2.49 to the public from noon-2. Hospital associates were served first from 11-noon.

“When I came here in 1980 I didn’t know how to cook,” said Dugas, who was three years out of high school at Abraham Lincoln. “A lot of elderly ladies cooked and they taught me different things.”

Dugas worked in various kitchen positions: salads, tray lines, and finally rose to cook. From her days as a novice, she said, she’s developed into an accomplished professional who cooks “everything well.”

She’ll look for another cooking position when she leaves St. Mary — the hospital, opened in 1930 and is scheduled to close July 18 — but until then, she said, she’ll serve hot meals to her children, who love her cooking.

Former pediatric nurse Nettie Scypion, who worked the overnight shift for most of her 33 years at St. Mary, said she loved the cafeteria but was more of a breakfast eater than burger eater because of her hours. Her favorite offering: the bacon-and-cheese sandwich.

“We would have breakfast here before we went home,” she said. “Everything was real and home cooked.”

Former colleagues of hers gathered at a table Friday and recollected days in the cafeteria. They remembered one cook, “Edna,” who was known for her burger creations. They remembered, too, when Dr Pepper was available in the machine for 10 cents a bottle. 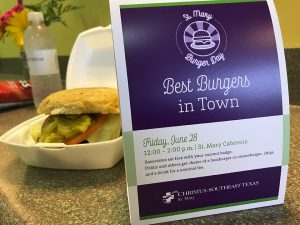 The hospital offered St. Mary Burger Day one more time Friday for the community to enjoy what was a favorite cafeteria offering. (Ken Stickney/The News)

Dr. Leon Hicks, a retired pediatric surgeon, said doctors had their own dining area but he remembers well what the Sisters of Charity of the Incarnate Word, who operated the hospital, served up prior to meetings: They’d roll out a “happy hour” cart, which shut down when it was time to meet.

“This was a thriving place,” he said. “It made a difference in a lot of lives.”

Maggie Henry, who said she was the sole African American woman to graduate the nursing school operated by the sisters from 1930-57, said she was not allowed to eat in the cafeteria as a student nurse in the 1950s. That, she said, was the result of laws imposing segregation.

She started work at the hospital after her 1954 graduation as a registered nurse, she said. She worked at the hospital 34 years, rising to assistant director of nursing before her retirement in 1988.

Bessie Lawrence worked at the hospital after her graduation from Prairie View in 1955 and remained there until 1996. She had 12 children, and retired as a supervisor.

She enjoyed it one more time Friday.