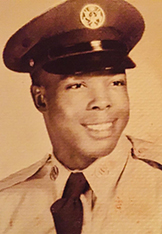 Mr. Jones was born on August 27, 1935 in Clayton, La to the late Mary Moore and Ike Jones. He graduated from Sevier High School in Ferriday, La.

Isiah was veteran of the U. S. Air Force and Active Reserved. He was resident of Port Arthur for over 59 years and
a retired Supervisor at Texas Dry Dock.

He is preceded in death by his parents Mary Moore and Ike Jones, grandparents who raised him Riley and Elena Moore, paternal grandmother Beatrice Moore, one sisters Rosa Lee Blakes, and one brother Harry Smith.

Funeral services will be 11 a.m. Tuesday, July 2, 2019 at Gabriel Funeral Home Chapel with visitation from 9 a.m. until service time.

Burial will be on Wednesday, July 3, 2019 at Houston National Cemetery under the direction of Gabriel Funeral Home.