From the ground up: Select contractors push to build Recovery homes 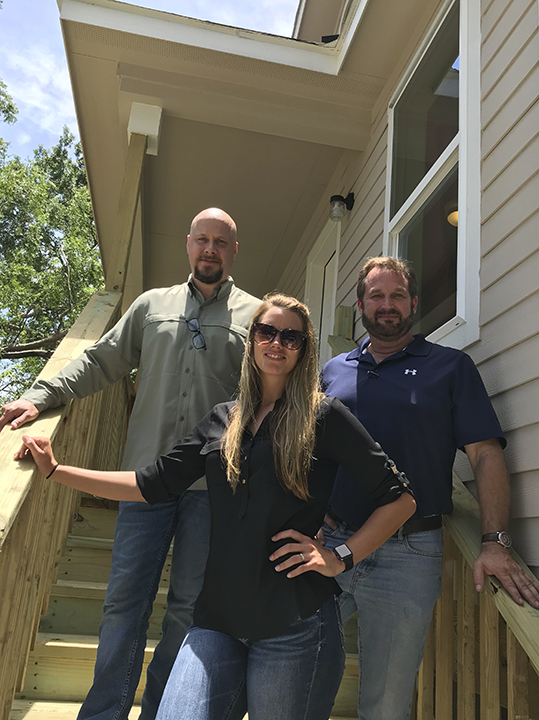 Shelby Sessums was born to build homes, she says, which is what the 28-year-old Montgomery County native is doing in Port Arthur.

She’s the contractor for a two-bed, one-bath, 1,000-square-foot Hurricane and Tropical Storm Harvey “recovery home” here, and is some two-three weeks away from her final punch list — weather permitting.

She works for Tegrity Homes, one for 17 builders vetted and chosen by the General Land Office and AECOM, a private company, to repair and construct homes damaged and destroyed by Harvey’s 60-inch deluge in August 2017. The raised residence she’s completing at 2847 31st St., within easy eyeshot of Memorial Boulevard, will house the owner who was driven from it by flooding that woke him and his wife in the dead of night. They were rescued by boat.

Sessums knows that feeling. Reared on a farm near Cut & Shoot, she and her family were driven from their home in 2010 when flooding forced them out.

“They opened the dam at Lake Conroe,” she recalled Wednesday of those stormy days. “Our cows got washed away.”

Sessums said the new owners at 31st Street would be better protected from flooding. Their home is raised above flood level and stronger materials will give them greater storm protection. They won’t have to fear water intrusion, she said, and with the solid exterior walls and greater insulation, their home will better withstand the elements.

“We’ve set them up for success,” she said.

The home, which features some touches chosen by the occupants, replaces a house rendered uninhabitable by the storm damage. Brittany Eck, a spokeswoman for GLO, said if qualified homeowners sustained home damages of less than $65,000, their home would be repaired; more than $65,000, the home gets rebuilt.

Rhonda Masters, who represents GLO in Jefferson, Orange and Hardin counties, said the homeowner likely applied for Housing and Urban Development federal assistance through a resource center such as the 501 Building in downtown Port Arthur. Those that qualify have pre-construction sessions with contractors and their homes undergo close inspections.

Eck said the program specifically meets “unmet housing needs”: Homeowners get what HUD deems they need, not, perhaps, as much as the homeowner might want. The homes comply with the Americans with Disabilities Act — the home on 31st has a ramp — and homeowners must fully insure the homes and stay in them for at least three years to meet requirements.

The first HUD home in the area was completed on Good Friday; Masters said a handful — perhaps seven or eight — have been completed in the region. Among those are three completed in Port Arthur; seven construction projects are underway.

Todd DeWalt, area construction manager for Tegrity, said the company, which specializes in disaster recovery construction, would get another 10 assignments soon. Tegrity has been doing disaster-related construction since Hurricane Rita in 2005.

DeWalt and Justin Johnson, vice president of construction for Tegrity, said the company is able to find plenty of subcontractors locally and that after the pre-construction phase, it takes some 60 days to build a home. Coastal weather may pose a challenge, but there are enough “boots on the ground” for sub-contractors, including women and minority-owned companies, to build solid homes.

They will all be needed. Masters said it may take six years to replace housing that Harvey damaged or destroyed. There have been more than 3,000 housing applications; more than 100 homes approved. The pipeline is starting to open for new construction starts.

That’s good news for Sessums, who travels to Port Arthur almost every day to watch over the 31st Street project. Sessums, whose mother was a builder for 16 years, learned construction first on her family’s farm growing up and then in stages until she became a contractor.