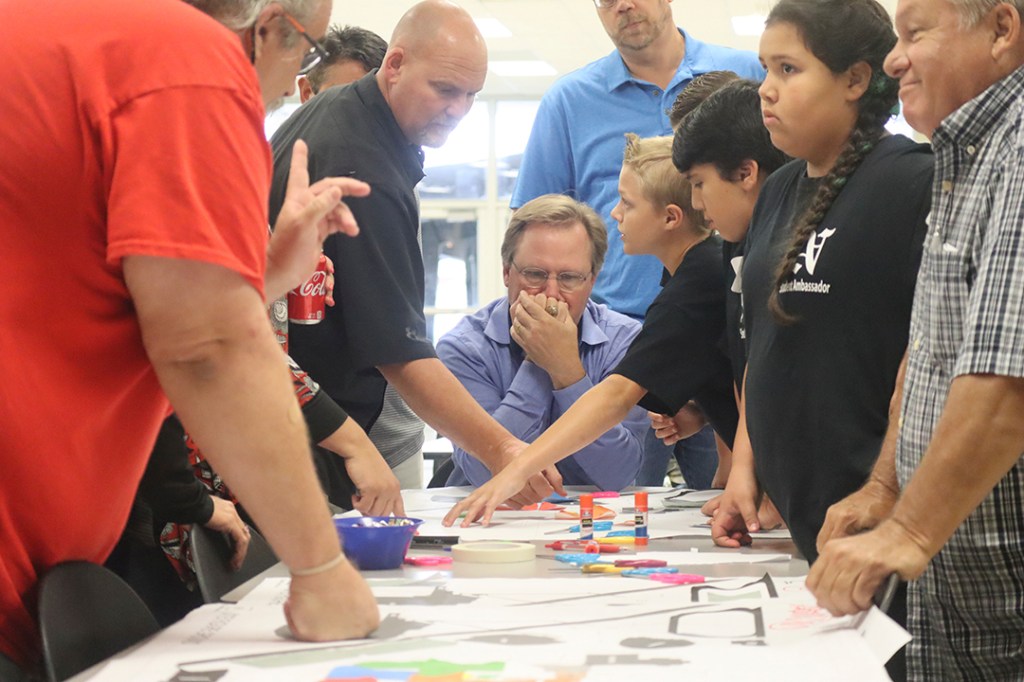 NEDERLAND — Residents who attended the second of three meetings about the design of the district’s new high school were charged with one task — come to a consensus on the “big picture components.” Those included:

By the close of the meeting, some 50 people present needed to agree on their answers.

Nederland residents voted in favor of a $155.6 million bond, which included a new high school at $87 million. The district hired architectural firm IBI Group to design the new school as well as the other projects in the bond.

Led by the firm Wednesday, the residents began designing the footprint on the first new school building the district will see in a half-century by the time the new high school is complete.

Each of the six groups was given a map of the current grounds and large cutouts of buildings and departments. The groups were charged with the task of making the design functional, aesthetically pleasing and practical.

Six teams created separate layouts. The layouts were taped to the wall, while members of IBI Group went over the pros and cons of each design along with the residents. 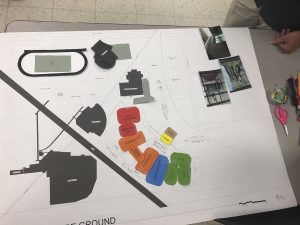 The final rough draft from the second meeting for the design of the new high school. (Chris Moore/The News)

One of the designs did not allow much room, if any, for expansion or parking for the gym. Another design required moving tennis courts, which were redone last year and had limited access from the Career and Technology E buildings and the rest of the campus.

The group voted on three designs to move to the next phase. Once the location was pinned down the groups designed three separate footprints followed by the same pros-and-cons process.

The final step was to take the three designs and incorporate as many pros as possible while limiting the cons.

Simpson sat among a crowd with a pencil in hand, outlining the design. While the process is far from being finalized, the group agreed the school should sit back from the neighboring subdivision but face its direction.

The group decided the administration and library should be centrally located and at the front of the building. The school’s track will likely be the last addition as it will take the place of the existing high school building and have a practice field inside. The team elected to keep the performing arts center and add on to the original design.

The CTE building will be near the terminus of Seattle Street and separated by the cafeteria from the rest of the academic buildings to reduce noise. The large and small competition gyms will be near the softball field.

The third and final meeting for the high school design is scheduled for mid July.

More specifics will be discussed at the final meeting.