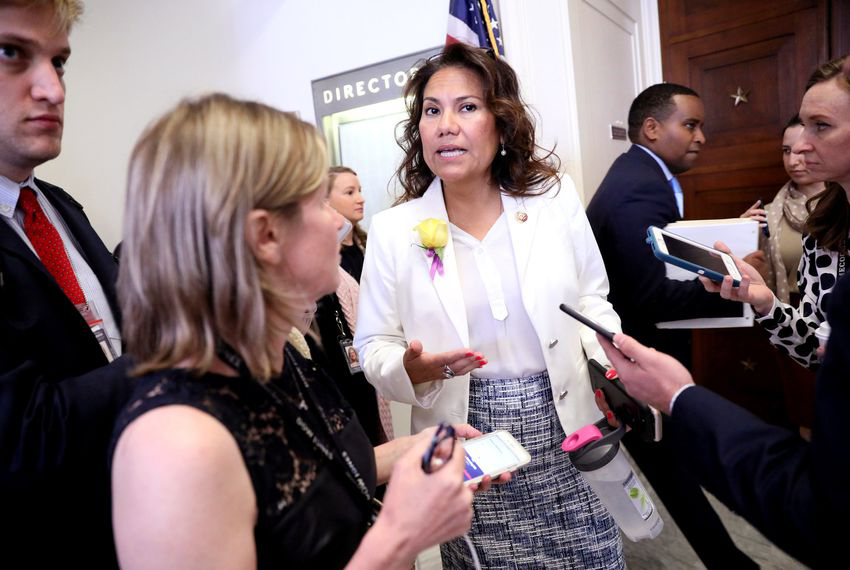 "There is an urgency, at least on my part, to get it out the door as quickly as possible," U.S. Rep. Veronica Escobar, D-El Paso, says of the border aid bill. (REUTERS/Jonathan Ernst)

WASHINGTON — As reports of migrant children being held in squalid conditions at federal facilities near the Texas border continue to draw outrage, Democrats successfully pushed a $4.5 billion humanitarian aid package through the U.S. House late Tuesday evening with a vote of 230 to 195.

The passage of the bill marks a narrow victory for Speaker of the House Nancy Pelosi, who managed to coalesce a unified front after several days of uncertainty and division within the party. Ultimately, only four Democrats broke rank, and none of them were Texans. Among the Republicans from the state, U.S. Rep. Will Hurd, R-Helotes, was the only member to buck his party, voting in favor of the bill. Hurd’s district covers much of the state’s border with Mexico.

In the days leading up to the vote, opposition on the Democratic side was concentrated primarily among members of the House Progressive and Congressional Hispanic caucuses who voiced concerns that the Trump administration would twist the bill’s intent to put some of the money toward border enforcement rather than migrant aid.

(In an issued statement, U.S. Rep. Randy Weber, R-Friendswood, who represents Jefferson County, said he opposed the bill because it did not provide money for officer pay and overtime, additional immigration judges and doesn’t fund investigations into human trafficking of children at the border.

“What this bill does do is provide additional incentives to entice more illegal immigration,” Weber said.)

On a Sunday conference call, more than 15 members of the Hispanic Caucus and 30 members of the Progressive Caucus expressed their reservations about supporting the bill, the New York Times reported. And at a tense meeting in Speaker of the House Nancy Pelosi’s office Monday evening, prominent members of both groups spoke against the bill.

Before the bill reached the House floor for a vote Tuesday evening, a notice from the U.S. House Appropriations Committee revealed that amendments to the bill would add several provisions aimed at funneling allocations directly into humanitarian aid.

The new version of the bill also includes an accountability clause that threatens to end contracts with detention centers that fail to meet a certain standard of upkeep.

Democrats found themselves under heightened pressure to expedite border relief funding after inflammatory reports last week about the conditions within migrant detention centers.

The Associated Press and other outlets exposed overcrowding, poor hygiene, and a lack of soap, diapers and toothpaste at a detention center in the West Texas town of Clint, citing lawyers who are monitoring conditions there under the terms of the Flores agreement, a 1993 settlement that dictates how children and families should be held in detention. More than a dozen children at the Clint facility were reportedly sick, and some were being quarantined, the AP reported.

U.S. Rep. Veronica Escobar, an El Paso Democrat with membership in both the House Progressive and House Hispanic caucuses, played a central role in shoring up support for the bill among the Democrats’ left wing.

As the vote on the bill, originally expected earlier Tuesday, was pushed later into the evening, Escobar expressed her exasperation outside of afternoon votes.

Adam Willis of The Texas Tribune, a nonpartisan, nonprofit media organization that informs Texans — and engages with them — about public policy, politics, government and statewide issues.