FOOTBALL: PNG takes on Texas in 7-on-7 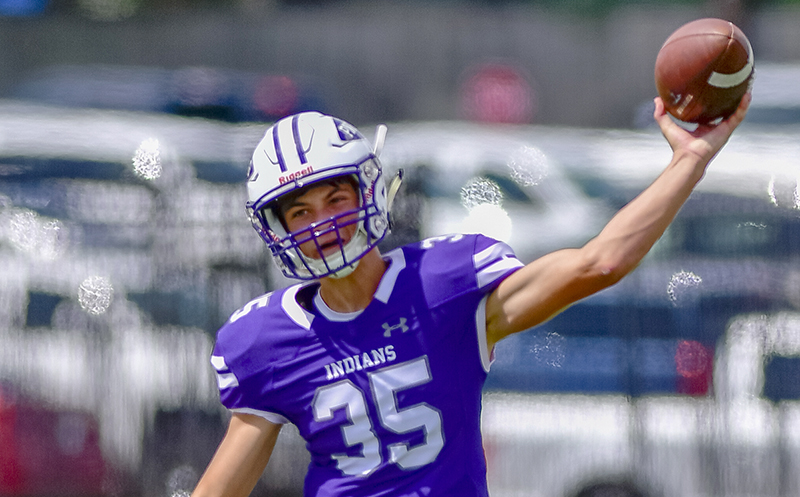 PNG quarterback Blake Bost fires a pass during a Sept. 15, 2018, game at Tomball. (Darren Greenway/Special to The News)

This coming season, Blake Bost will assume the controls of Port Neches-Groves’ offense.

“It’s given me a lot of confidence,” Bost said of playing 7-on-7 football. “Being the leader of the team, it’s a big role to step into, but it’s exciting and I’m looking forward to it.”

The quarterback position at PNG has been under a statewide microscope the past three years with Roschon Johnson’s run-and-pass abilities. Johnson took his talents to the University of Texas shortly after graduating high school last December and is in contention to be a top backup behind Sugar Bowl MVP Sam Ehlinger.

This weekend, junior Bost is helping take the Indians’ talents to College Station for the Division I Texas 7-on-7 Championship at Veterans Park and Athletic Complex. PNG earned a berth in a qualifying tournament at Richmond Foster after going 2-1 and winning a semifinal over Houston Lamar. (No championship game was held.) The Indians are going to the state 7-on-7 tournament for the fifth time in program history.

“Seven-on-7 to me fits in the same category as summer conditioning or spring football,” 11th-year PNG head coach Brandon Faircloth said. “They continue to get reps and work together. It’s a great tool. We utilize it to talk to our kids about those two words — get better.”

PNG, a 5A Division II Region III semifinalist a year ago, will square off against two 6A teams on Friday — Southlake Carroll at 1 p.m. and Clear Brook at 3 p.m. — followed by a 5 p.m. battle with 5A Division I Hutto. The top two teams in each pool — PNG is in Pool D — will compete in Saturday’s championship bracket play.

The Indians already have experience against 6A teams in 7-on-7, having beaten Cinco Ranch and Houston Westside in pool play and Houston Lamar to qualify for state. Traditional power Katy beat PNG in a pool game.

“We’re going to be playing really great competition,” Bost said. “We’re going to get a lot better from this. This is going to help us out during the season, playing 6A schools.”

Another benefit of 7-on-7, Faircloth named, is Bost’s opportunity to work with the offense and understand defenses in depth. Coaches are not allowed on the sidelines during 7-on-7 per UIL summer policy (Faircloth and other coaches will watch from an end zone), so Bost has been calling plays.

“It’s a great asset for us,” Faircloth said. “[Senior linebacker Santiago] Agudelo calls the defense. It’s a great deal out there as leaders for them take a coaching role.”

It’s also been a big deal for Bost to learn from two recent graduates during last season, Grant Rogers and Johnson. Rogers started against Tomball early in the 2018 season as Johnson went down with an ankle injury the week before against Huntsville, prompting Faircloth to call up Bost.

“It was great leadership roles by both of them by being great teammates, showing great energy every day and never having a bad day,” Bost said.

Division I Texas 7-on-7 Championship