‘What $40 did for me’: Local CFL Hall of Famer Don Narcisse, wrapping up cancer battle, traces career back to mom’s gift 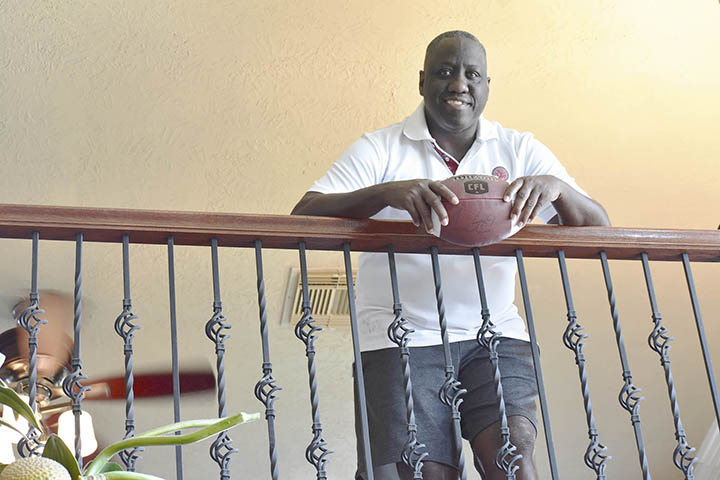 Don Narcisse has a celebration planned for his completion of cancer treatment on July 15. pic.twitter.com/ZnbZzxPNWD

MANVEL — Don Narcisse’s treatment for Stage 1 prostate cancer has been more challenging than any football game he played. 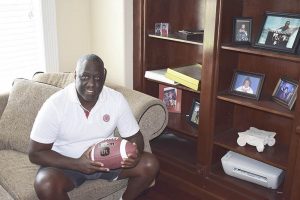 “I’ve been doing radiation for the last 15 days, but through that process, I had to go through about three biopsies, been put to sleep a few times, I had to do a colonoscopy, I took two hormone shots — they cost $16,000 each,” Narcisse said June 14. “That’s something. Good thing we have the health insurance.”

Plus, the 54-year-old has been trying to shed weight he gained during this battle of more than a year, a cancer fight he proudly looks forward to completing July 15 with his signature touchdown dance from his Canadian Football League days called “The Strut.”

“It’s going to be overwhelming,” he said, his voice softening as emotions settled on the second floor of his Manvel home. “It’s going to be, uh … by having this cancer stuff, it’s going to be like … it put a strain on your life. It’s a lot of things you’re not able to do. Doing radiation, it takes at least four hours of my day. I have to drink 64 ounces of water each day and hold it in my bladder. That’s one of the hardest things to do.

“But to inspire other people and make sure you always go to the doctor and get checked, it’s going to be overwhelming. I just can’t wait to get this out the way, to beat it.” 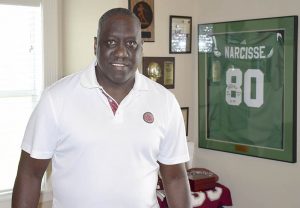 Born and raised in Port Arthur, Narcisse built a 13-year CFL Hall of Fame career that includes a 1989 Grey Cup championship and a catch in each of his 216 games after being signed as a free agent from Texas Southern.

Narcisse’s pro career, which he spent entirely in Regina, Saskatchewan, wouldn’t have taken off if his mother Dorothy had not given him $40.

“Mom would send me $20 per month while I was in college,” he said. “She would always send someone up to my college to give me the money.”

Just cut from St. Louis (now Arizona) Cardinals tryouts, Narcisse learned about tryout for the Saskatchewan Roughriders in Shreveport, Louisiana. His mom gave him $20 for himself and another $20 to pay Harold Smith, a former Texas Southern quarterback who had spent the two previous seasons in Saskatchewan and was driving Don to the tryouts.

“There were 400 guys at the tryouts,” Narcisse said, “and four of them signed. I was one of them.” 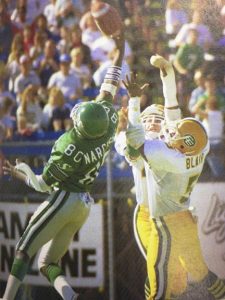 Don Narcisse, playing with the Saskatchewan Roughriders, reaches up for a catch against the Edmonton Eskimos in this undated photo. (Courtesy photo)

Narcisse often posts messages on Facebook to inspire others and draw inspiration for himself. Family, friends and fans of the Saskatchewan Roughriders — Narcisse’s team from 1987-99 — often reply for good cheer.

He can remember being the player facing odds stacked against him at Lincoln High School in Port Arthur.

Recruiters from Texas Southern were scouting Lincoln quarterback Ken Vaughn during the 1982 season when Bumblebees coach Joe Washington Sr. told them about Narcisse, who eventually grew into a 5-foot-10, 170-pound wideout. But Narcisse’s mind flashed back to the opportunity Washington first gave him to play the position.

“It was just one spot,” he said. “They were looking for one receiver, and the guys I was going against, they all ran track. They were taller than me, faster than me, they were stronger than me, but you know what? He picked me.”

Last Saturday, Narcisse and Vaughn traveled to DeSoto to celebrate Washington’s 90th birthday. Narcisse had a question he wanted to ask his coach, whose son Joe Jr. was an Oklahoma All-America running back and Super Bowl champion:

“Coach, why did you pick me, man? You had every opportunity to pick these other guys.”

Narcisse soon earned his scholarship to the historically black university located just adjacent to the University of Houston in the city’s Third Ward. That was the result of the second opportunity Washington gave Narcisse.

“Texas Southern was looking for Ken Vaughn,” Narcisse said. “But coach Washington told the coaches, ‘You should look at this kid. He can catch a BB in the dark. He works hard and has a great attitude.’”

Vaughn began his collegiate career at Lamar and transferred to Texas Southern to rejoin Narcisse two years later. Meanwhile, Narcisse had teamed with Darrel Colbert Sr., a fellow wide receiver who was a member of West Brook’s first graduating class (1983) and had just won a state championship in the Beaumont high school’s first year of operation.

“I consider [Narcisse] a brother,” said Colbert, whose son Darrel Jr. just completed his collegiate career as Lamar’s quarterback. “We kind of traveled the same path, him from Port Arthur, me from Beaumont. We came in as freshmen together at TSU.”

Narcisse started seventh on TSU’s depth chart but moved up to third after three games while competing with Colbert for playing time.

“We worked out and competed with each other every day,” Narcisse said. “If it was tying shoes to see who could tie shoes the fastest, that’s what we did. We met each other in 1983 and we’re still friends.”

By 1986, Narcisse was a first-team All-American and had won the NCAA Division I-AA (now Football Championship Subdivision) receiving title. He caught 88 passes for 1,074 yards as a senior, good enough to earn a tryout with the St. Louis Cardinals as an undrafted free agent. (The Cardinals moved to the Phoenix area in 1988.)

“I was the top prospect, but I went up against more experienced prospects, and I didn’t make the cut,” Narcisse said.

Then came that fateful ride to Shreveport.

“I did a check-up at the doctor’s. They told me my PSAs were high,” Narcisse said. “I still don’t know what PSAs are.”

PSA stands for prostate specific antigen, a prostate-gland produced protein which according to MedicineNet may be used to screen for cancer of the prostate and to monitor treatment. “A very small amount” goes into the blood stream, the website added.

Narcisse said he felt fine before the doctor visit, calling the check-up routine.

“He was like, ‘We just need to test you and see if you have, you know, prostate cancer.’ Then, they found out that I did, so I had to go back and do a biopsy and stuff like that.”

Narcisse’s cancer never advanced past Stage 1, since it was caught early.

“When I found out, my wife had called my brothers and sisters,” he said. “I was still going back and forth to Canada. She was like, ‘Hey, he’s leaving Monday. Y’all need to holler at him.’”

Narcisse had worked for a car dealership in Regina for eight years, splitting time between there and greater Houston. That Sunday, the doorbell at his residence rang, with his siblings waiting to deliver a message to Don, the fourth of Dorothy and Paul Narcisse’s six children (two older sisters, one older and two younger brothers).

“My brothers and sisters were like, you’re not going nowhere. You need to get this taken care of,” Narcisse said. “From that moment on, my older sister — she had pancreatic cancer — she beat it, so she came over here, and she coached me up. She was like, ‘Look, make sure you go on Facebook and let everybody know because what’s going to happen is that you’re going to be able to help a lot of people on your platform. A lot of people are going to be able to help you out. I did it the next day, and the next thing you know, it’s been unbelievable.”

A lot of people including two of his fellow Tigers — Vaughn and Colbert.

“He’s not worried,” said Vaughn, a recent stroke victim, of Narcisse. “I’m going to be there for him. All of our [Lincoln] classmates, they’re praying for him. We’re one. We’re praying for Narcisse.”

Two days before Narcisse completes his treatment, he’ll be in Port Arthur to help with New England Patriots linebacker Elandon Roberts’ heart walk and football camp at Memorial High School. The walk begins at 8 a.m., with the camp to start at 10 a.m.