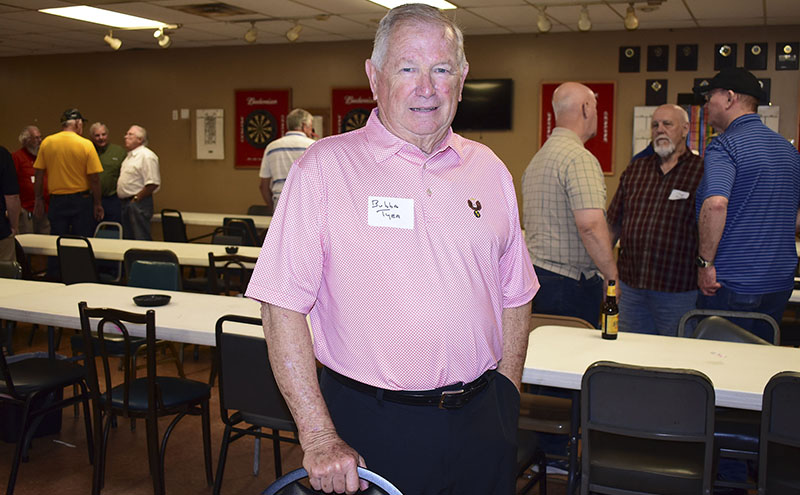 NEDERLAND — Joe Washington Jr. checked into The Schooner restaurant Friday night, not knowing a reunion of Nederland athletes was held in a private room.

Nederland football players from the 1950s and 1960s gather each summer for a reunion that was started by late coach Neal Morgan and is still organized by former Baylor offensive lineman Herby Adkins, a member of Nederland’s 1957 3A state championship team.

Washington, a 1972 Lincoln graduate and two-time national champion at Oklahoma, had just missed Bubba Tyer, who was an equipment manager on the last Bulldogs football team to play in a state title game. Tyer was Washington’s head trainer with the Washington Redskins, and the two won a Super Bowl together in the 1982 season.

“I’d have to say Bubba doesn’t demand that you do [anything],” Washington said. “He gives you the alternative situation and suggests what needs to be done. He has a repertoire of ways to get there. He has that calmness and approach about him without getting defensive. You listen to him and you go from there.”

Tyer served as a trainer in the franchise for 37 seasons, 34 of those as the head trainer, and took part in five Super Bowls, winning three (1982, 1987 and 1991 seasons). Only Lincoln alumnus Tim McKyer and West Orange-Stark product Kevin Smith have won as many Super Bowls coming from the Golden Triangle.

During that time, Tyer has helped many of the Redskins who spent most if not all their entire NFL careers in the franchise stay in shape, including cornerback and Texas A&M-Kingsville product Darrell Green (1983-2002), quarterback Joe Theismann (1974-85), wide receiver Art Monk (1980-93) defensive end Charles Mann (1983-93) and linebacker Monte Coleman (1979-94).

“Bubba was very key to the program,” said Coleman, a former Arkansas-Pine Bluff head coach. “A lot of our careers were extended because of the care Bubba gave us. I’m sure if you ask everyone, they’ll say they love Bubba. He was always professional. He always provided the treatment for the injuries we had.”

And to think such a prolific career began in Nederland.

‘COULD HAVE PLAYED ANY POSITION’

Born and raised in Nederland as the son of an auto mechanic, Preston Lamar Tyer developed a passion for sports. By the time he enrolled at Nederland High, the Bulldogs already had a state championship to boast.

“When you grow up in Southeast Texas and football is king, you just want to be with your friends, and I had many of them who played football,” Tyer said.

Former Bulldogs quarterback Jake David said Tyer was as good an athlete as anyone on the team.

“He was very wiry and strong,” said David, who earned a scholarship to the University of Texas. “He could have played any position.”

Except that a vehicle incident while Tyer was in junior high left him unable to compete in contact sports.

The fracture did not require a metal plate to be inserted.

Since Tyer “couldn’t get his bell rung,” as David put it, he became an equipment manager for the Bulldogs. In their senior season (1961), the Bulldogs went back to the 3A state title game but lost to Dumas 3-0.

Tyer did become a solid athlete in his own right. He ran the 100-yard dash and 440-yard relay at Nederland and qualified for the regional meet in the long jump.

START OF A CAREER

Tyer went with David to UT and became a student trainer for the Longhorns. He transferred the next year to Lamar State College of Technology (now Lamar University) and served in the Marine Corps from 1967-70.

J.B. Higgins, a former Lamar football coach and athletic director, recommended Tyer for the position of athletic trainer for the Marine Corps’ football program while in Camp Pendleton, California. King Dixon, a legendary University of South Carolina halfback who later helped the school get into the Southeastern Conference, coached the team.

“Then I got ordered to Quantico [town in Virginia] for the Marine Corps sports program,” Tyer said.

Bobby Gunn, Lamar’s athletic trainer at the time who was also president of the National Trainer Association, introduced Tyer to Redskins coach George Allen in 1971. Gunn had just become the team’s head trainer, and Tyer became his assistant.

Before that season, Washington had been missing from the NFL playoffs for 25 straight years. The 1972 Redskins won the NFC championship before losing to the unbeaten Miami Dolphins in Super Bowl XII in Los Angeles.

“We stayed in a little motel in Anaheim, California,” Tyer recalled. “The week went by pretty fast. There was not much [activity] surrounding it. It amazes me to see how it’s grown. It’s amazing how it takes over the city today.”

Aside from the evolution of the Big Game, Tyer’s profession has experienced rapid growth of its own.

“In 1971, there was one doctor and two trainers on the team,” Tyer said. “Last year, they had 17 medical persons. The league requires there by a neurologist, emergency medical specialist and an orthopedic surgeon on the sideline for every game.”

Part of the growth in each team’s medical care, Tyer added, also has to do with competition outside the playing surface. Many sports franchises usually partner with an independent medical team.

“Each team tries to outdo another,” Tyer said.

Tyer has become sort of a celebrity in the Washington area. He’s been inducted into the Redskins’ Ring of Fame along with the team’s big-name coaches and players, including coach-turned-NASCAR team owner Joe Gibbs, who led the Redskins to all three of their Super Bowl titles.

“I enjoyed working with Joe,” Tyer said. “A lot of coaches and owners don’t want trainers to say anything, but if Joe couldn’t answer a question about a player’s health, he’d just say, ‘Just go talk with Bubba about it.’”

Joe Washington Jr. said Tyer was an accommodating trainer who knew each player’s likes and wants.

“He set things up to make them the best and the safest for you,” Washington said. “For instance, I taped my ankles all the way to my knees. After we didn’t tape my ankles after knee surgery, he was fine with it.”

“People think you only work six months out of the year,” Tyer said, “but it’s a year-round job.”

He still goes to Redskins’ games on occasion, as the team gives him sideline credentials.

Although Gunn left the Redskins after one year, according to Tyer, to join the Houston Oilers, Tyer remained stuck with the Redskins.

“You got your foot in the door, and there are so many people I like,” the longtime Ashburn, Virginia, resident said. “I was there and settled. I didn’t want to change.”

His dedication earned him distinction among Bulldogs of old inside the Fraternal Order of Eagles’ lodge for a Saturday barbecue lunch.

“He’s the only man in this room who’s shaken hands with five presidents,” David said.