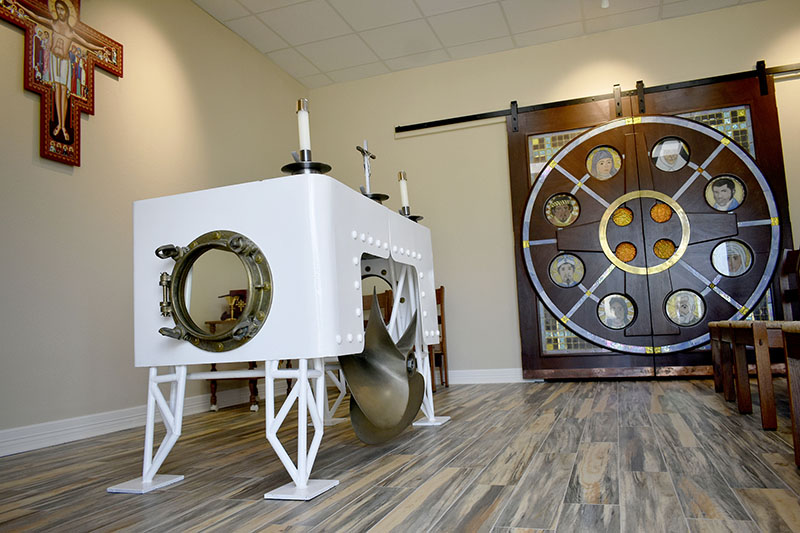 Construction and completion of the Seafarers’ Chapel has been a long time coming. 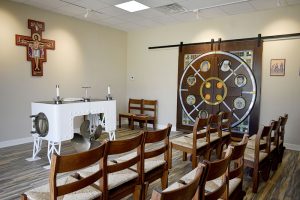 The wait’s almost over.

The blessing of the chapel will be held at 5:30 p.m. Tuesday on the International Day of the Seafarer at the Port Arthur International Seafarers’ Center, 401 Houston Ave.

The ecumenical chapel — it is meant to serve all faiths — is aimed primarily at seafarers who come to the area.

The altar, designed by Capt. Beau Dumesnil, has two real portholes on its sides and a real ship propeller at the bottom front. Gulf Copper fabricated the altar and included rivets that make it look like a ship and the top of the altar is a shrimp boat door.

But talking about the chapel requires a history lesson of sorts. The Seafarers’ Center is located on the site of the former Kansas City Southern train depot, which arrived with the railroad and was torn down in the early 1970s. Talks of building the center to serve merchant mariners started in the late 1990s and work began April 1, 2004.

“There was a 14-inch active sewer main the city didn’t know was here,” Badeaux said of the rough start to the building’s construction. The line was rerouted, then along came Hurricane Rita in 2005.

The Houston Avenue building was completed in phases as funding would allow, but supporters knew it would not be complete without a chapel.

Rose and Joe Patronella donated money for a crucifix and the item remained in a crate for years. During Holy Week, the Rev. Sinclair Oubre was moving items around and wondered aloud how long the crucifix had been there waiting to be placed in the chapel.

Steve Brisendine, vice president of Echo Maintenance, was one of many who jumped in to help make the chapel a reality.

“When I joined the Seafarers’ board I quickly learned there were plans for a chapel there but we were not getting any traction on it,” Brisendine said.

A donation in honor of Elizabeth and Harold Bean and Katherine and Anthony Phelan kicked off some of the project. Echo contributed, then Newtron Electrical, H.B. Neild, Mike Roebuck and more. Some paid for materials and labor, some provided labor.

“It’s been a labor of love, that’s for sure,” Brisendine said. “I’m really blessed to be part of it. This was an opportunity for a lot of people to give back to the Port Arthur community and seafarers from all around the world. A lot of people don’t realize how important our port is and I didn’t realize at first; just about everything we use in our daily life comes through the port.”

Looking at the finished work, Brisendine said he feels pride.

“This is probably one of the greatest things I’ve accomplished and I’ve done a lot of stuff. I’ve been in construction my whole life. But completing something to serve those men, that means a lot to me. It touched me deeply,” he said.

One of the focal points of the chapel is a set of ornate doors that once hung at St. Mary Catholic Church, established in 1903 but now merged with Sacred Heart. The inset of the doors feature stained glass images of international saints.

“As we were building we were trying to figure where the doors would go,” she said.

A perfect space was found and what lies behind those doors is a surprise that will be revealed Tuesday.

Mass for mariners is usually celebrated aboard their ships, but the chapel will be a place for prayer and reflection.

Badeaux said they have been trying to find the blueprints to the original train depot because they had no idea what the area where the chapel is located used to be. That was until an older gentleman came in one day and asked — “Do you know what this room was?”

“He said it was the ‘colored’ waiting room,” Badeaux said. “This was a place of division, now it’s a place of unity. To me that is a highlight, like God is fixing the ills from the past.”