Donnie Stanton’s got this much top of mind for Port Arthur’s water utilities department: 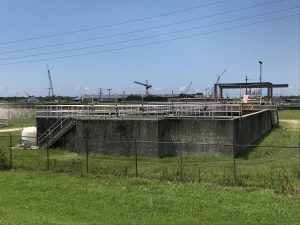 That’s a million and a half bucks to address the city’s most imminent water demands — there’s money in the bank for that, at least — with $120 million more in projects to go over the next five years in the city’s capital improvement plans.

What’s the rollout plan for all of those projects, intended to improve water service needs in Port Arthur? Without a trace of irony, Stanton, interim director of water utility operations, said they’re all “fluid.” 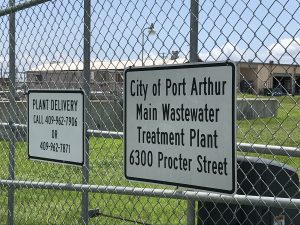 Plans call for the replacement of the main wastewater treatment plant in a year. (Ken Stickney/The News)

These are among the high-ticket projects that Stanton, who has applied for the permanent job, told councilmembers this week are among department plans from 2020 to 2024:

The last of these is made necessary because the water main running down Savannah Avenue has proven to be unreliable. That’s the line that ensures water service continuity to downtown and to industry.

The city has guaranteed reliable infrastructure downtown to Motiva, which is in the process of rehabbing historic buildings downtown and moving some 500 office workers into the area at a cost to the company that may approach $150 million. Announcement of the development, made with great fanfare, has signaled downtown’s rebirth, city leaders believe.

Stanton said the goal is to install a new, alternate line to the existing Savannah Avenue line, which would stay in place.

There are funding sources, including almost $14 million in the Water Utility Fund. Other sources include bonds and a forgivable loan. But Stanton said the city is seeking to avoid long-term debt.

“The city is committed to finding free money: forgivable loans and grants wherever they exist,” he said. Utilities, he said, are supposed to pay for themselves.

This year, he said, the water department may get into the black — the fiscal year ends Sept. 30 — because of rate adjustments, better collections and other initiatives.

But stuff happens. That’s why capital projects have to be prioritized before they are all pursued right away.

For example, Stanton said, his department has had to respond to a costly emergency on West Port Arthur Road — to replace a 30-inch water main — and in July will address lift station issues in Sabine Pass. The effort is planned there in July because wet soil in Sabine Pass has thwarted some repair efforts.

“Right now, we have 25 water leaks,” he said. “The current staff is staying up to date.”