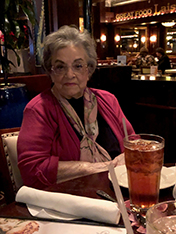 Georgene V. Dibrell passed away, Sunday, June 9, 2019.  Georgene (Jean) was born in Chicago, Illinois on September 26, 1927 to George Valas and Agnes Piotrowski.    She married the love of her life, George, in 1953.  They were married 57 years. They had one daughter, Debbie. She was employed by Southern Union Gas in Port Arthur, Texas where she was Personnel Coordinator.  She was active in the Service League, Port Arthur Council of Camp Fire Girls and the American Business Women’s Association. She was a graduate of Lamar University.  One of her greatest joys was her two grandsons.  She attended many of their baseball and basketball games.  She was “Gocci” and they had her wrapped around their fingers.  She’s survived by her cherished daughter Debbie Turk, wonderful son-in-law, Robert Turk, and special grandsons, Hayden Matthew Turk and Parker Gibbs Turk. Georgene’s services will be private at Laurel Land Memorial Park in Dallas on Friday, June 21, 2019.