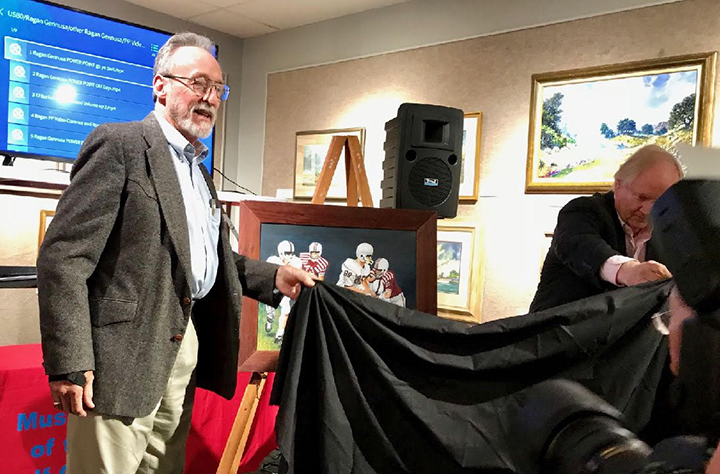 Ragan Gennusa, left, and Tom Neal unveil a Gennusa work at his induction into the Museum of the Gulf Coast’s Hall of Fame for Notable People. (Ken Stickney/The News)

Wildlife artist Ragan Gennusa was inducted into the Museum of the Gulf Coast on Thursday, but he didn’t come alone. 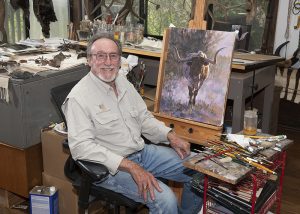 Ragan Gennusa relaxes in his Hill Country studio at his home. (Bart Bragg/Special to The News) 6-20-19

Gennusa, an acclaimed football player — Thomas Jefferson High, 1963, and the University of Texas, 1968 — was accompanied by 120 friends and family members, teammates and admirers, people who remember the unassuming but accomplished athlete and artist as a hometown success story.

In a 45-minute induction, museum director Tom Neal recounted highlights of Gennusa’s athletic and artistic careers, which later melded during the Mack Brown era of 15 years at UT. Gennusa painted a trilogy of longhorn-themed paintings for UT, starting in 1998, which were later sold as prints signed by coaches Darrell Royal and Brown, that were enormous fund-raising vehicles for the football program. They marked the start of the Mack Brown era, the Longhorn football team’s ascent toward respectability and a return to program glory when the Longhorns won a national championship in the 2005 season. 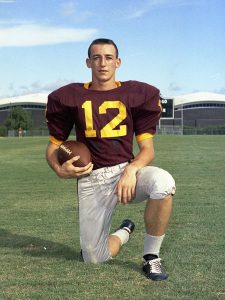 Nominated for induction by former Port Arthur Mayor Bob Morgan, Gennusa, who now lives in Texas’ Hill Country, keeps a few head of Longhorns on his ranch, where he paints for commission. He’s been an independent and celebrated artist, which is why he was recognized for inclusion in the museum. Among his honors was selection as State Artist of the Year in 1985.

In brief remarks, Neal and Gennusa recalled the influence that former TJ coach Clarence “Buckshot” Underwood had on his players, including Gennusa. The former coach, who coached at Kentucky under Paul “Bear” Bryant, was rugged and demanding, but instilled in his players a will to win even under extraordinary hardships. Gennusa said Underwood’s influence helped him to weather myriad of injuries at Texas before Gennusa eventually earned a starting role, and helped him sustain his drive for artistic accomplishment while Gennusa was a young and struggling painter.

True to Underwood’s demands, Gennusa never quit on the football field; he never quit in his quest to paint.

The inductee recollected those who helped him along the way, among them family members, who were in attendance; former TJ art teacher Roger Russell; track coach Smitty Hill; and those who helped guide and foster his career as a young and continuing professional artist.

Among those he recognized in the crowd were former players under Underwood, who coached for 10 years in Port Arthur starting in 1957.

Gennusa said he was especially honored to be remembered in Port Arthur, which he considers his hometown.