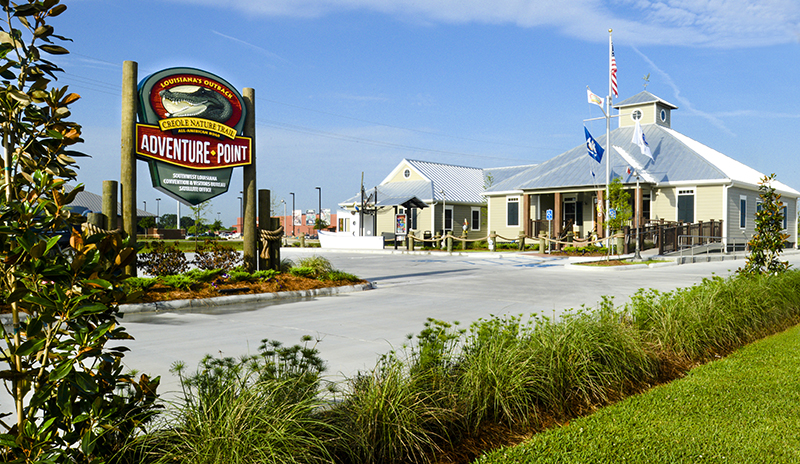 Adventure Point is located at 2740 Ruth St. in Sulphur, Louisiana. (Courtesy of the Lake Charles Convention and Visitors Bureau)

This is the fourth in a series of stories called “One-Tank Trips,” about places families might visit on a tank of gas, enjoying overnight stays on small budgets. 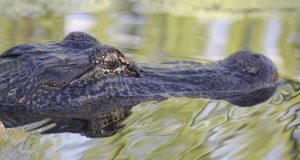 Alligators are in abundance along the Creole Nature Trail, particularly in the summer. (Courtesy of the Lake Charles Convention and Visitors Bureau)

SULPHUR, Louisiana — This is no zoo — there are no bars, enclosures or habitats behind glass — when visitors are traveling around in the Wild’s own back yard. This is the real deal.

Life is everywhere along the Creole Nature Trail. Birds, mammals, fish, crabs, blooming flowers and, of course, alligators make their home in the four wildlife refuges that can be found along the 140 mile-long byways that make up the Trail.

A round trip can take 3 hours and 25 minutes of driving, but visitors don’t need to blaze through the entire Trail, as there is more than enough to see.

“You can do the trail in a day if you want to just do the walking trails and go to the different wildlife refuges, take pictures, enjoy nature, and have a beautiful sunset,” Lake Charles Convention and Visitors Bureau Communications Director Angie Manning said. “You can literally spend as much or as little time as you want, it just depends on how much time you have and how involved you want to be.” 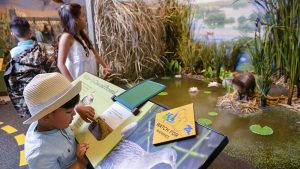 Adventure Point in Sulphur has exhibits that showcase the Creole Nature Trail’s features, as well as guides to help visitors make plans on what they would like to see. (Courtesy of the Lake Charles Convention and Visitors Bureau)

Louisiana Gov. Edwin Edwards signed a law in 1975 that established the trail along 117 miles of highway in Cameron and Calcasieu parishes, encouraged by the Creole Nature Trail Committee, which was composed of members from the Calcasieu and Cameron police juries and the Convention and Visitors Bureau. The trail was designated a State Scenic Byway with a law passed in 1993 and was lengthened to include highway from Holly Beach to the Texas/Louisiana state line, for a total of 140 miles.

The trail was chosen in 1996 to take part in a program with the National Park Service and Louisiana State University to develop a corridor management plan, which was then used that year to apply for and receive a National Scenic Byways designation from the Federal Highway Administration, allowing the Trail to apply for grants.

In 2002, the Creole Nature Trail was officially designated an All-American Road and has since received over $4,917,000 in grant funding, some of which was diverted towards recovery efforts after the Trail was devastated by Hurricanes Katrina and Rita in 2005.

Though there’s no official place to start, travelers are recommended to make a stop first at Adventure Point, located at 2740 Ruth St. in Sulphur, Louisiana. Sitting at the north end of the western leg of the trail, Adventure Point is the place to go to get acclimated to natural wonders of the Trail — and get a heads up on what to look for and where to find it once out in “Louisiana’s Outback.”

Trail guide Will Nidecker, who makes sure to walk the Trail every week, works with visitors to make a plan on what they want to see and do.

“We try to give (visitors) as customized an experience as we possibly can, given the parameters they give us,” Nidecker said. “Sometimes they ask for more than they can get.”

While learning about the sights along the Trail, families can explore the exhibits and hands-on displays that preview the Trail’s sights.

As the bird flies

Birds of many colorful kinds can be found in the waters and marshes of the Trail. Whether it’s the black cormorants diving below the waters or their larger cousins, the brown pelicans, gliding and looking for fish, there’s no shortage of avian species to see.

The roseate spoonbills, or “Cajun flamingos,” are very popular with visitors, according to Nidecker. These beautiful pink birds were once hunted to near extinction for their plumage but are starting to make a comeback. The spoonbill will swish its spoon-like beak back and forth in the water looking for bugs, crustaceans and small fish.

Whooping cranes are another favorite of tourists, Nidecker said.

“A lot of people want to know where the sightings of the whooping cranes are, because they are an endangered species,” Nidecker said. “If you see one flying over, it’s this white B-52 bomber — these things are huge — and those are a highly desirable bird for a lot of the birdwatchers to see.”

Perhaps the most sought after sight for visitors is the Gulf’s resident pink dolphin, appropriately named “Pinky,” popular enough that the dolphin has its own Facebook page. Sightings, and even video, of the rare pink dolphin in the waters of the Gulf, as well as some rivers in Calcasieu and Cameron parishes, have cropped up for several years. Some have even seen Pinky with a pink calf.

Nidecker said the best place to see the pink dolphin is the Cameron jetty, but the jetty remains closed at the moment due to plant construction projects.

For those that do get to see Pinky, post to Facebook a photo and the location where the sighting took place to let other visitors know where to find Pinky themselves.

The best place to see alligators, according to Nidecker, is the Cameron Prairie Wildlife Refuge’s Pintail Drive. Stop at the walking trail to see a beautiful array of birds, mammals and water lilies, but once back on the road, keep a lookout for a number of gators, especially during the summer.

Nidecker has some tips on bettering the odds of seeing gators: “Drive no more than 5 mph, do it steady, don’t speed up, don’t slow down, just do it steady. And if you want to take pictures, just lean out the window; they’re not going to jump in your vehicle. If you stop, the gators are going to disappear. Why? Because the gators think you’re going to chase them, and everything about a gator is survival.”

Manning was sure to offer her own tip: “We do not recommend chasing the gators!”

The trail leads all the way down to the Gulf of Mexico, where a number of beaches offer a place to cool off, swim or hunt for sea shells. Visitors should bring beach gear that includes extra water for washing off sand and waterproof shoes for traversing shelly beaches more comfortably.

The state of Louisiana requires a license to fish in its waterways, but there are no licenses required to go crabbing. Travelers should bring some string, chicken necks and a buckets and find some water along the trail to nab as many crabs as they can. Nidecker says it can take time to finally catch a crab, but many people come to the Trail specifically to meet the challenge.

Traveling through the Trail means traveling while immersed in nature and all its challenges. Visitors are encouraged to come prepared.

In the cooler seasons, visitors are encouraged to bring bug repellant to keep mosquitos away, but should be advised that repellant doesn’t work on all bugs, like biting deer flies.

Nidecker has another tip: “Just spray it on until it almost runs off your arm. Why? You have to because when those deer flies land on your skin, they’re going to just slide right off of you, because it does not repel.”

Other things to bring include: