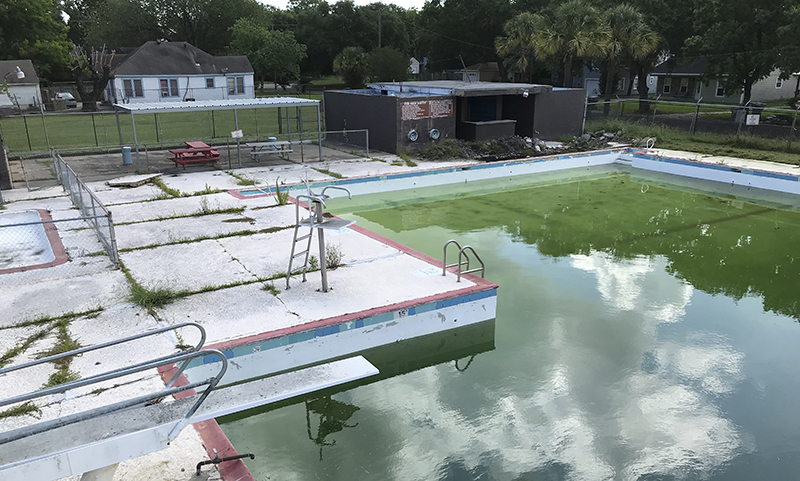 The pool has deteriorated in recent years and can’t be repair, engineers say. (Ken Stickney/The News) 6-18-19

Neighborhood children of decades past remember fondly their summers at the Lakeview Park pool.

Those who posted to Facebook on Gulfway Drive Memories on Wednesday recalled days in the 1960s and 1970s when, like daredevils, they dove off the platform. That was a test of mettle.

Or, for the especially mischievous, efforts included riding their bicycles into the pool, or sneaking into it for a swim late at night after closing.

Port Arthur City Councilmembers this week authorized spending almost $40,000 for design work on the park, which would call for closing the pool, now in disrepair, and possibly adding a “splashpad” as a hot weather water feature and perhaps a soccer field. Public meetings will be held to gauge Lakeview neighborhood interest.

Interim City Manager Rebecca Underhill — she was once one of those Lakeview “pool kids,” back in the 1970s — said a soccer field might add an “extra season” to the park’s use. Sounds smart. Councilmembers from the dais said the neighborhood — Lakeview was once its own small town, annexed by Port Arthur in 1978 — has transitioned into a largely Hispanic and Latino neighborhood, and a soccer field would be especially popular with children living there. They may have the pulse of the community.

In fact, neighbors like Rogelio Cardenas said this week his own children sometimes play soccer in the street for the lack of a field. Neighbor Alfred Kuntz, who has lived in his Lakeview home for four decades, said he’d love for his younger neighbors to enjoy the park, just as his own son did in the 1980s.

There does not seem to be much pushback from anyone about redoing the park to better serve local children. This week, a Parks and Recreation crew cut the grass there, but other than a playground area for small children, there was not much to beckon neighborhood kids. The park was empty, save for the work crew.

The pool, once a center of summertime joy, was locked and the fence bolstered with barbwire to keep intruders out. The pool leaks badly, the concession stand has crumbled.

The idea ought to be to attract youngsters into the park, not keep them away. The Parks and Recreation Department has the right idea: Make the park an attraction again. Give Lakeview children the chance to enjoy a park that was meant for fun.

The city has a small stash — about $250,000 — that would help refashion the park into something usable again. More may be needed.

But District 2 Councilman Cal Jones, who lives nearby, says he’s ready for action: He wants to hear children playing in the park again. So do neighbors. All those in favor, attend those public hearings. We’ll keep you posted.