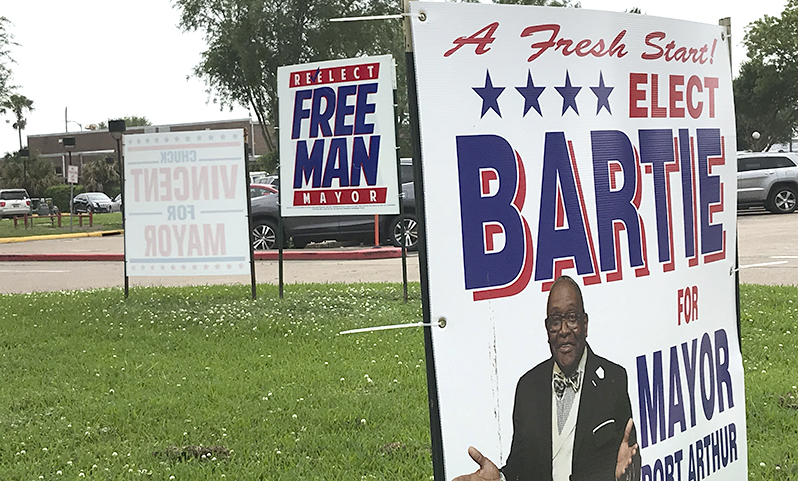 City Secretary Sherri Bellard said 2,486 Port Arthur people voted in the seven days of early voting — June 10-15 and June 17-18 — just short of the 2,547 votes recorded in early voting for the May 4 General Election, when far more candidates and races were on the ballot. She released those numbers Wednesday.

Port Arthur voters will choose Saturday between incumbent Mayor Derrick Freeman, who drew 35 percent of the May 4 vote, and challenger Thurman Bartie, who took 24 percent of the votes in the General Election. Freeman is seeking a second, consecutive three-year term.

There were five mayoral candidates running May 4, with only the two finalists advancing to June 22. Other candidates were Chuck Vincent, Willie “Bae” Lewis and Lowra Harrison.

“There were no problems. It went great,” said Bellard, who is the chief elections officer for the city. “Voters said they loved the new machines, which they described as voter friendly.”

The city has purchased its own machines since 2008; for this year’s municipal election, they purchased machines that were certified by the Secretary of State’s Office.

The vote totals for early ballots may reflect the fact that voters from four boxes — precincts 43, 60, 61 and 101 — voted in the Port of Port Arthur commissioner race on the May 4 ballot but live outside the municipal limits, and so don’t vote for mayor.

“People are engaging in the election,” Bellard said, which she said was “awesome.”

She credited the two candidates for generating voter interest by running vigorous campaigns.

Bellard said for the past decade, voter turnout for mayor hovered around 7-8 percent of the 31,000 registered voters; the May 4 turnout was 13 percent. Those who did not vote early can cast their ballots from 7 a.m. to 7 p.m. Saturday at their regular polling places at the following locations: