Open for (local) business: Contractors get a chance to work with Golden Pass 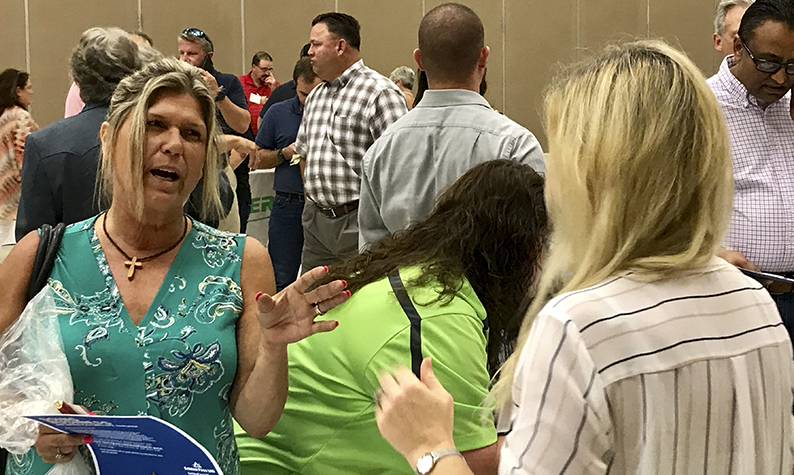 “Golden Pass, No. 1, is so proud to be in a place that supports industry like this place does,” said Robert Bilnoski, Golden Pass LNG vice president. “We would not be here without that support.

“We hope through this initiative to encourage and create future opportunities for businesses, citizens and the future growth of our region.”

Ryan Crockett, GPX technical manager for the project, said Golden Pass launched the initial part of its construction project in February and doesn’t expect its completion until the end of 2024.

“Everyone has an opportunity to participate,” he said.

Tuesday’s event was one of some 40 initiatives the company has launched or will launch to give local people a chance to be part of the project, McDonald Carheel of Carheel Consultants, a workforce solutions company, said.

Among the opportunities, Carheel suggested, was for people with initiative to start their own companies to vie for business with Golden Pass during the course of the five-year construction. The Small Business Development Center from Lamar State College Port Arthur was there to advise people how to do that.

“Our project, along with all of the new development in Southeast Texas right now, is creating an incredible opportunity for local businesses to survive,” John Fraser, Golden Pass vice president of operations, said. “With the enthusiasm we’ve received, it’s clear local businesses are excited to join in our growth. And it’s up to us to create the maximum opportunity to ensure our community has the right tools, the right information and the right connections to realize those opportunities.”

Golden Pass expects to support about 19,000 construction jobs during the project; at its peak, it will have 7,000 workers on site.

The Perryman Group said this year that during construction and during its first 25 years of operations, Golden Pass would generate up to $34 million in economic gains and $5 billion in tax revenue at local, state and national levels.

“We were docking whaling ships for Guffey,” he said, alluding to the Gulf Oil Corp. predecessor that started in 1901. “I’m still here and we’re still cooking.”

The Business Forum gave Carlsen’s local business the chance to participate in another generation of the energy business.

“We have everything this company could need,” he said, adding that Carlsen’s Mooring Service’s dock is less than 2 miles from the Golden Pass site.

In opening remarks to the forum, Pat Avery, president and CEO of the Greater Port Arthur Chamber of Commerce, lauded Golden Pass’ consistent efforts to involve the community in its unfolding story and to provide local people with the chance to participate in its success.

“It’s a tremendous company,” she said. “This is a great corporate citizen.”