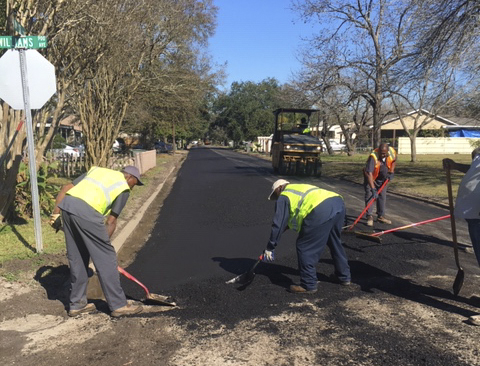 A Port Arthur city crew does remediation on a stretch of pavement on Eighth Street from Williams to Duff. (Courtesy photo)

The Port Arthur City Council on Monday OK’d street remediation on seven streets beyond those already completed in this fiscal year.

Approved for work and estimated costs were:

Those street projects were moved forward from the Fiscal Year 2020 projects plan because the city street crews had completed their FY 2019 projects early and at some savings. FY ’20 starts in October, but the street crews said they could handle additional work.

The city is also using money previously approved but not yet spent to accelerate its citywide street repair program. In all, the city had about $2.2 million money to spend on the additional projects.

District 3 Councilman Thomas Kinlaw said decisions on which 2020 street projects to “fast track” were made by a ratings system. Those chosen rated among those most needing work.

The streets were all chosen from City Council districts 1-4. Two alternate projects were chosen in case city crews were not able to immediately address projects in Districts 1 and 4.

Among other council actions, Deputy Police Chief John Owens, who oversees emergency preparedness in the city, told councilmembers the city is well prepared for the 2019 hurricane season, which began June 1 and will last through Nov. 30.

“We are prepared. I want everyone to know we are prepared,” Owens said in a thorough presentation. “I’m not tap dancing with you.”

Owens said city leaders and staff have ample experience in facing hurricanes and other catastrophes, have substantial contacts with other regional and state leaders and have learned from previous experience, which dates back to Hurricane Rita.

He said preparedness is discussed weekly and that emergency personnel know their assignments. He said shelters are designated but that because Port Arthur is a coastal community, evacuation is required in many cases.

He also discussed the city’s plans for debris and communication. Debris collection sites are designated and materials are being distributed to city residents in three languages: English, Spanish and Vietnamese to keep people informed.