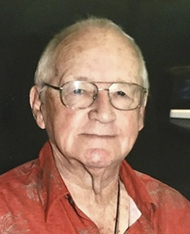 Jerry graduated from Port Neches High School in 1955 and enjoyed many happy memories of school friends and his beloved purple and white Indians, over the years. He was proud to have been on the 1953 State Championship football team.

After graduation, Jerry joined the United States Navy and served across the Caribbean and at that time, was able to visit Havana, Cuba. After active duty, he served in the Naval Reserves and worked as an Operator at Neches Butane Refinery in Port Neches for 36 years, retiring in 1994.

Jerry enjoyed camping and boating with his family and RV travel with his wife, Helen. They traveled across 46 of the lower 48 states and lived the good life enjoying cruises and multiple trips to Europe.

A special thank you to the nurses and staff of Kindred Home Health and Hospice, who provided selfless, continued care. In addition, the family appreciates the tender and loving care provided by his caregivers, Latrell Zeno and Katie Boudreaux.

A visitation for family and friends will begin at 11:00am, Tuesday, June 18, 2019 at Clayton Thompson Funeral Home in Groves, followed by a rosary/ service at 12:30pm.  A Mass of Christian Burial will take place at 2:00pm at Immaculate Conception/St. Peter Catholic Church in Groves.  Burial will follow at Oak Bluff Memorial Park in Port Neches.