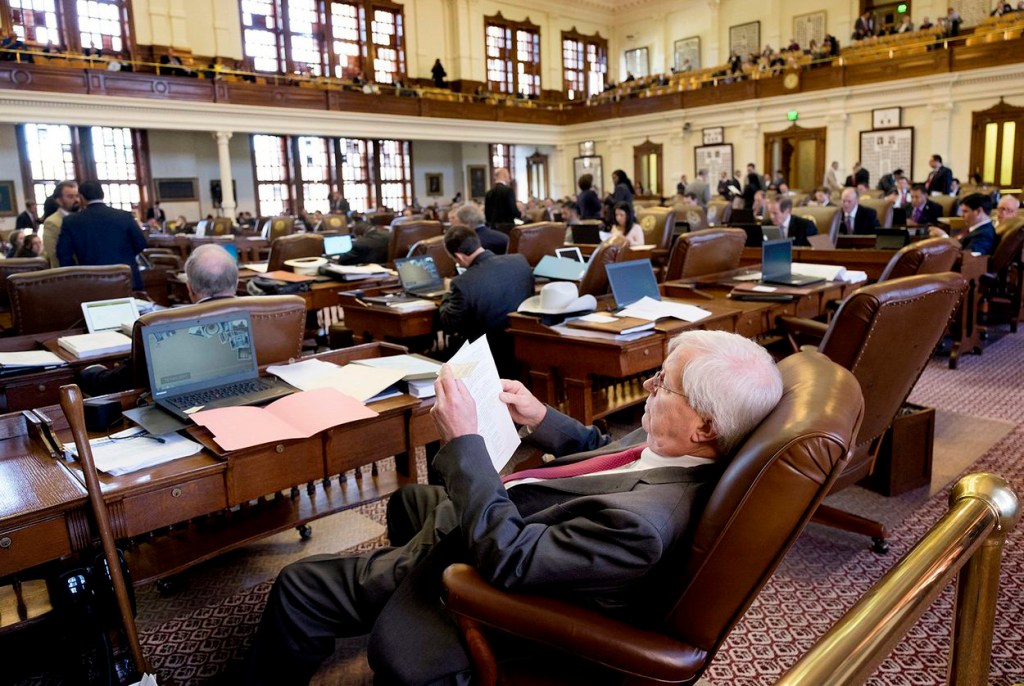 By Shannon Najmabadi
and Jay Root

Some are urging Abbott to reject the measure before the deadline to veto bills ends this weekend. Among them is First Amendment lawyer Joe Larsen, a member of the Freedom of Information Foundation of Texas, who calls House Bill 4181 a “knife in the dark” that will make it harder to hold lawmakers accountable.

Authored by powerful state Rep. Charlie Geren, R-Fort Worth, the bill would let lawmakers assert “legislative privilege” to withhold work-related records that are currently subject to the Texas Public Information Act. While the Legislature can already object to the disclosure of documents used to create or evaluate proposed legislation, critics of the bill say it would mark an expansion of lawmakers’ ability to wall off their records from public scrutiny.

The change comes as the Texas Legislature is being praised for strengthening open government measures, including the closure of a loophole that let private government contractors withhold information.

“It is ironic that in a session in which they make progress on open government, they exempt themselves,” said Bill Aleshire, an Austin-based attorney and former Travis County judge. “They probably should have captioned this bill … ‘Do as I say, not as I do.’” Aleshire is also urging Abbott to veto the measure.

Under the bill, which was sponsored by state Sen. Kelly Hancock, R-North Richland Hills, private communications concerning a “legislative activity or function” would be considered confidential and subject to a “legislative privilege” exemption. This would include all private exchanges among lawmakers, legislative staffers, credentialed interns, the House speaker, the lieutenant governor and the governing boards of legislative agencies.

Some officials could opt to release them voluntarily.

The bill would also allow for some documents to be unilaterally withheld — saving the Legislature from first seeking approval from the state attorney general’s office, which typically plays referee on what information must be released.

“My instinct is it’s not in the best interest of transparency to have the party seeking to not disclose documents being the [sole] arbiter on that,” said state Sen. Kirk Watson, D-Austin, who authored several open government measures during the legislative session. He said he could not vote for HB 4181 because it codifies “such broad exceptions to the Public Information Act for legislative documents and communications.”

The provisions came packaged in an administrative housekeeping bill designed to address the “organization and efficient operation” of the Legislature, according to its caption. The measure sailed through both chambers with little discussion and received only a handful of opposing votes, including from Watson and Republican state Sens. Brandon Creighton, Bryan Hughes and Angela Paxton. None of the Republican senators responded to requests for comment.

State Rep. Mayes Middleton, R-Wallisville, who voted against the final version of the legislation, said he “strongly disagrees with the trajectory of the bill” and that it goes “against greater transparency.”

Watson said he felt the bill “was hurried through the legislative process” without substantive discussion of the transparency-related provisions.

A section of the bill explains its intent is to “protect the public’s interest in the proper performance of the deliberative and policymaking responsibilities of the legislature.” It suggests the “legislative privilege” addition will help preserve the lawmaking body’s independence, in accordance with the state constitution’s call for a separation of government powers.

In a brief exchange about the bill on the House floor, Geren said lawmakers and agencies must still preserve records in accordance with state retention schedules or for any litigation.

He said legislative and attorney-client privilege could not be used to “aid in the commission of a criminal offense.”

The Texas Public Information Act was adopted in the 1970s, in the wake of a stock fraud scandal involving powerful state officials. Several politicians were chased out of office, and the act was swept into law alongside reforms meant to open government operations to public scrutiny.

“Open government is vital to a free and informed society,” said Texas Attorney General Ken Paxton in a letter included in a 2018 handbook about the act. “Texans have a right to know how their government is spending their tax dollars and exercising the powers granted by the people.”

The portion of state statute that details the act says, “The people insist on remaining informed so that they may retain control over the instruments they have created. The provisions of this chapter shall be liberally construed to implement this policy.”

Since the act’s passage, a court ruling has given local governments and private contractors wide leeway to withhold certain information that would impact their competitive advantage. Lawmakers tightened that exemption during the 140-day legislative session that ended in May — a move hailed by open government advocates as a win.

Larsen, the Houston-based First Amendment attorney, said unless Abbott vetoes the bill, it will allow the Legislature to hide special-interest influence over the legislative process.

“Eventually, it becomes something you could almost sweep anything into,” Larsen said. “People, when they’re given that kind of power, will exercise it. It’s human nature. It’s certainly institutional nature.”