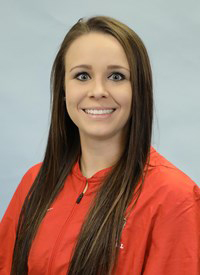 It was at the school’s softball camp, and PNG girls athletic coordinator Barbara Comeaux said Harvill’s enthusiasm for the game showed.

“We had more kids than we ever had,” Comeaux said. “We got a lot of compliments form the parents. We look forward to her obviously bringing new life to the team and her knowledge of the game, as well as her enthusiasm. She’s really positive. She pushed them, but she was also encouraging.”

Harvill has been hired to replace Jessica Lemoine, who took the same position at West Brook. Lemoine led the Indians to the 5A playoffs in five of her six years at the helm.

For Harvill, a 2013 Lumberton alumna who graduated from Lamar in May, her new position seems to be a natural fit.

“It’s close to home in the area,” she said. “I remember we played against them in high school. They always have amazing athletes. I thought it would be a great program become better and stronger.”

Harvill served as a student assistant the past two years at Lamar, the first under Holly Bruder and the second under Amy Hooks. She went on from Lumberton to Lamar State College Port Arthur before winding her career at Prairie View A&M as a junior in 2016.

“Playing at the college level helped break down the sport,” Harvill said. “When you get out of high school, you think you know everything about the game when you don’t. Getting a grasp and breaking down the mechanics gives you a better understanding.”

Harvill already has a welcome addition to her staff. Kayla Gallardo is stepping down as Bridge City’s head coach to join PNG as an assistant.

Gallardo won three district championships and posted a 100-33-3 mark in four seasons at BC, according to The Orange Leader. The mother of a 2½-year-old son is expecting her second child, a girl, in late July.

“I’ve heard good things about her,” Harvill said. “She’s super knowledgeable, and I’m happy to have her on the staff.”

Comeaux, who recently stepped down as PNG volleyball head coach after 47 seasons, said she interviewed “several people” for the softball position. The vision Harvill had for the future of the program is what separated her from more experienced coaches in Comeaux’s mind.

“Her enthusiasm, her competitiveness and the knowledge,” Comeaux added about Harvill’s qualities. “She was a pitcher, and that’s always a plus.”

**UPDATES with comment from Harvill; clarifies she was a student assistant and just earned her bachelor’s degree**