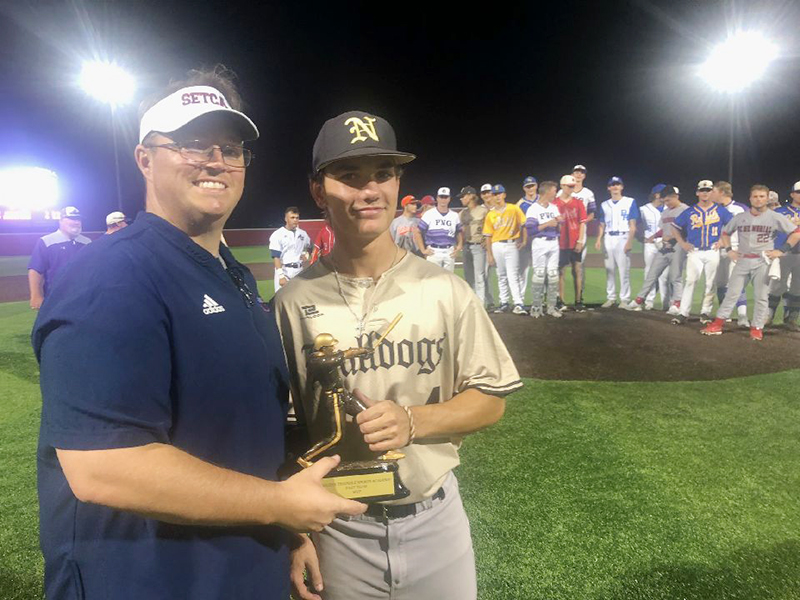 Bobby Locke of the Southeast Texas Coaches Association presents the East team MVP award to Landon Hiltz of Nederland on Thursday in Crosby. (Michael Sudhalter/Special to The News)

Nederland’s Landon Hiltz was honored to be the Most Valuable Player of the Christus All-Star Classic baseball game on Thursday night.

Hiltz scored the first run of the East’s 7-4 victory in the first inning. He capped the East’s six run sixth inning when he scored on a sacrifice fly.

The Coastal Bend College commit said he enjoyed playing alongside his Nederland teammates and former rivals from Port Neches-Groves.

The East pitchers collectively took a no-hitter into the bottom of the seventh inning. Once the West got its first hit, they put together a significant rally.

The West trailed 7-4 with two outs in the bottom of the seventh when Hardin-Jefferson’s Justin Smith smashed a ball to right field. The West would have cut it to 7-5, but Smith was called out trying to reach second base.

East head coach Scott Carter said it was a fun experience to coach in the game, including the opportunity to lead his PNG Class of 2019 players one last time.