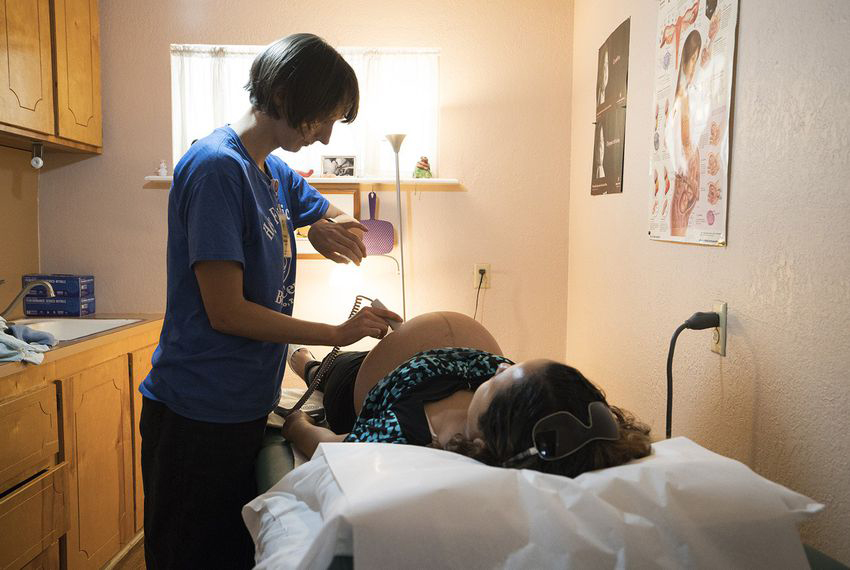 Vanna Waldron (left) evaluates Erika Piñon at the Holy Family Birthing Center in Weslaco, Texas. Waldron is a Certified Nurse Midwife from Seattle, Washington, who is volunteering at the birthing center for a year. (Reynaldo Leal for The Texas Tribune)

Texas Gov. Greg Abbott claimed in a tweet Sunday that “critics” of the state’s maternal mortality rate had lied about it, citing a year-old article that described how reports about the number of women in Texas dying from pregnancy-related complications were based on faulty data.

“Turns out the critics of the Texas maternal mortality rate were just lying. It’s less than half of what the critics said. It’s about 1/10 of 1%,” Abbott tweeted.

But it was problems with the state’s own data that led to initial reports that Texas’ maternal mortality rate was far higher.

The governor’s office did not immediately respond to The Texas Tribune’s questions about Abbott’s tweet, or his suggestion that critics were “lying.”

Texas has struggled for years with accurately reporting maternal mortality — where mothers die from pregnancy-related complications while pregnant or within 42 days of giving birth. In 2016, a study in the journal Obstetrics and Gynecology found that 148 Texas women had died from pregnancy-related complications in 2012, more than double the 72 women reported in 2010. That report garnered national attention and prompted the state’s top health experts to review their data.

The study found that, similar to other states, Texas relies mainly on data from death certificates to track the maternal mortality rate. That data requires health officials to check a box on the death certificate to indicate whether a woman was pregnant before she died.

Black women in Texas were still at the highest risk of dying during or after their pregnancy compared to white women and Hispanic women, according to the new study. Under the new data, the rate of black mother deaths in 2012 was 27.8 per 100,000 live births compared to 13.6 for white women and 11.5 for Hispanic women. That’s continued to prompt concern from advocates and health experts.

During the legislative session that ended last month, several bills were filed to address the state’s maternal mortality rate. A 2018 report from the state’s Maternal Mortality and Morbidity Task Force found that a majority of the reported maternal deaths in 2012 were women enrolled in Medicaid during delivery. House Bill 744 by state Rep. Toni Rose, D-Dallas, attempted to tackle that issue by extending Medicaid coverage for pregnant women to 12 months after “the date the woman delivers or experiences an involuntary miscarriage.“ It passed the Texas House but ran out of time in the Senate.