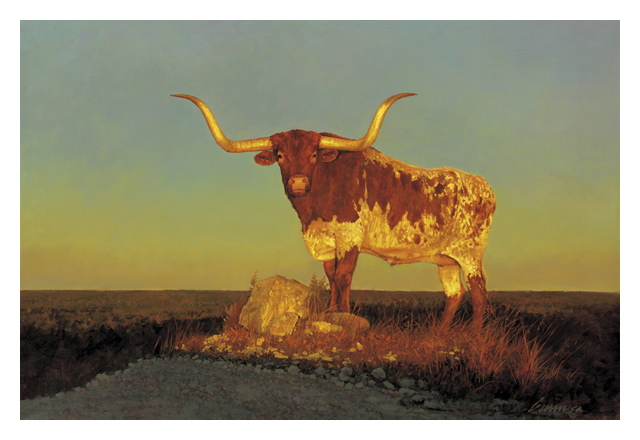 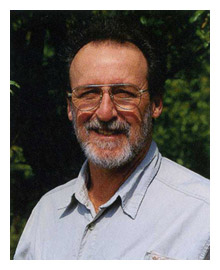 Ragan Gennusa? He counts Clarence “Buckshot” Underwood as an enduring influence on his life.

No, not as an artist, but as a man. Underwood, for a decade in the ‘50s and ‘60s a legendary Thomas Jefferson High School football coach, instilled in Gennusa, his one-time quarterback, a drive for success, a penchant to push himself beyond what he thought was possible.

“A lot of kids may have disliked him, but later on realized he did something for them,” Underwood recollected recently. “What he did was push them beyond what they thought they could do.”

Underwood was such an influence, Gennusa said, that his players pushed for his inclusion in the Hall of Honor of the Texas High School Coaches Association. When he was inducted, posthumously, more than 60 players attended. Usually, they were told, inductees bring a handful. But Underwood’s influence was enduring in his players’ lives. 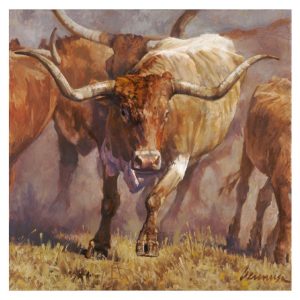 “Life is full of adversity. Football is, but life is, too. If you are pushed beyond what you think you can do, you realize ‘I can do this.’ It keeps you from quitting,” Gennusa said. That’s what Underwood taught him.

Gennusa, who’ll enter the Notable People Hall of Fame at the Museum of the Gulf Coast in a 5 p.m. June 20 ceremony, knew from the outset that his life as an artist would include daunting challenges. Money would be an issue. Marriage and family would need to be delayed, he said.

But his years playing at “TJ,” where he was a vaunted enough player that he earned a scholarship to play at the University of Texas, formed in him a fire that never fizzled. Injured — badly — while playing for Coach Darrell Royal, he bounced back after long recovery, first on the practice squad and later as a receiver who worked his way up to starter.

If you can shake off the pain, he said, you can do anything. 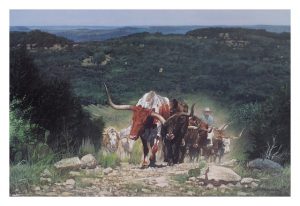 The Climb to the Top, by Ragan Gennusa

Gennusa had long sought a two-prong path to success: one, as an all-state quarterback and track star; the other as an artist.

“When you are born, you are wired a certain way,” he said. “Creative people have strong feelings about being creative. They make a commitment to it. I knew what I wanted to do. I took art courses seriously.”

“He knew I was serious about it,” Gennusa said. While the student knew he wanted a creative life in art, he didn’t know exactly how to pursue it. Teacher talked with student about illustrating for sports, about commercial art and other avenues for his expression.

Port Arthur, too, served as an influence on the aspiring artist. His passion for the outdoors was served by Port Arthur’s location, but, he said, the frequent rain oftentimes pushed the avid outdoorsman indoors.

There, he said, from an early age he’d spend long afternoons drawing animals from books in his home.

Gennusa’s affection for the outdoors led him to consider focusing his attention on wildlife art, combining his passions. It wouldn’t be the first time he’d do that.

While in Austin, he majored in art. He never considered anything else. At graduation, he was offered a sales job for $900 a month, then a princely sum for a young man, but instead he took a job in a print shop for $350, acquired skills about that aspect of art, and later moved on to a job for $500 as an artist at Texas Wildlife.

While he was the “low man” at Texas Wildlife, his knowledge about production helped him move quickly up the ladder there. He continued to show his paintings locally, painting at night, but he moved on to paint for a gallery, and never stopped painting.

Eventually, his prowess for wildlife art earned him connections with cattle ranchers, farmers and influential patrons. He painted at historic ranches, on game hunts, at the King Ranch, and more. He started reading about the history of ranches, and to acquire cattle himself.

Among his most memorable work is a series of three paintings — the trilogy — he did for the Texas Longhorns to encourage support during the Mack Brown era in UT football, which lasted from 1998 to 2013. They were done between 1998 and 2005.

Gennusa was impressed by Brown and offered the paintings to reflect the start of the new era, the climb to new prosperity and, finally, recapturing the national football title.

Gennusa’s selection for inclusion in the museum was based on his long, successful career, which included numerous accolades, including State Artist of Texas in 1985 and the Texas Historical Foundation’s John Ben Sheppard Jr. Merit Award. In 2016, he was awarded the “purchase prize” by the Briscoe Museum in San Antonio — it became part of the permanent collection there — and in 2017 won the Briscoe Museum “Patrons Prize” for best painting.

A half-century after his graduation from Texas, Gennusa continues to paint but on his own schedule and only on projects that interest him. He said he’s delighted to be included in his hometown’s museum, and remembers the Port Arthur of his youth fondly.

“If you can do it, making a living in art, there is nothing more rewarding,” he said. “You’ve got to get through the adversity. If you can do that, you gain something from it.”