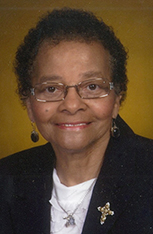 Mrs. Doris Mae Goudeau of Port Arthur died Friday, May 31, 2019, at the Medical Center of Southeast Texas. She was surrounded by several family members as she left this world to be reunited with her husband, mother & father, and sister in Heaven. A gracious and beautiful soul she was, and she will be dearly missed by those left to carry on her legacy of service to the Catholic Church and the community of Port Arthur.

Doris was born on December 21, 1932, in Baldwin, LA., to Wallace and Hester Phillips. A few years later, the family moved to Port Arthur. After attending and graduating from Sacred Heart Catholic High School, Doris met and married the love of her life, W.B. Goudeau, Jr. From this point, their life of selfless service to the Diocese of Beaumont and the City of Port Arthur is a legacy to behold. Doris was a kindergarten teacher to hundreds of young children in Port Arthur for over 30 years. Doris taught many First Communion classes, Confirmation classes and sponsored numerous new Catholics in the RCIA program.  She cherished those sweet experiences. She was one of the founders of St. John the Evangelist Catholic Church in the El Vista neighborhood of Port Arthur. She was also a member of the Legion of Mary and the Knights and Ladies of Peter Claver.

Doris was married to W.B. Goudeau for 54 years. She and W.B. were the proud parents of Mary Ann (Goudeau) Reid and W.B. (Bernard) Goudeau, III. She was a precious grandmother to her nine grandchildren. She dearly loved her brother, Wallace Phillips, Jr. of Port Arthur.

A Christian wake to be held Friday, June 7, 2019 from 6 p.m. until 9 p.m. at Gabriel Funeral Home Chapel with a rosary recited at 7 p.m.  Funeral service will be 10 a.m. Saturday, June 8, 2019 at Sacred Heart Catholic Church with visitation from 8 a.m. until service time.  Burial will follow in Live Oak Cemetery.