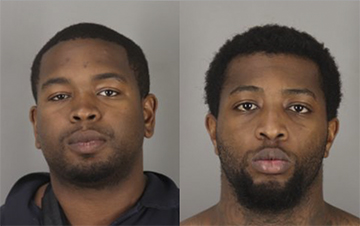 Adreyon Fobbs, left, and Clifford Kidd, both of Harris County are charged in connection with the smash and grab felony theft at EZ Pawn on East Lucas on Wednesday.

BEAUMONT — Two Harris County men are behind bars in connection with a smash and grab felony theft at EZ Pawn on Wednesday.

Beaumont police responded to a panic alarm around 4:30p.m. at the pawn shop located at 4135 E. Lucas then additional calls came in saying the suspects had crashed their vehicle near Target and were fleeing on foot, according to a press release from BPD.

Witnesses told police one suspect entered the store with a large hammer and the second suspect acted as lookout. The man with the hammer smashed glass display cases and took and estimated $50,000 worth of jewelry then the two left in a black Buick LeSabre that was parked behind Village Shopping Center.

From there the suspects turned right on Pinkston and right on the service road where they crashed into a Toyota Avalon with two occupants at Lucas and Eastex Freeway. The suspect vehicle has extensive damage and continued north on the service road then pulled into the Target shopping center parking lot and fled the vehicle.

They were taken into custody without incident and charged with felony theft. A crash report was taken and the suspects will face charges for the hit and run crash. The two men in the Toyota were treated by emergency medical services for minor injuries.