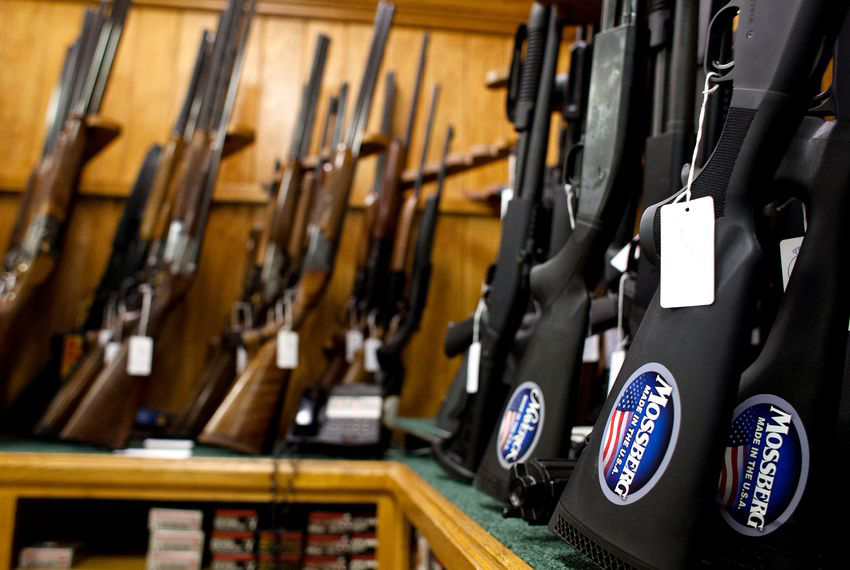 Rifles on display at McBride's Gun Inc. in Austin. (Callie Ricmond for The Texas Tribune)

After several of their priority bills failed to gain traction, some gun rights advocates said House and Senate leadership failed them. Now they’re calling on Gov. Greg Abbott to veto a line item in the state budget they say would add insult to an injurious legislative session.

But that same line in the state’s $251 billion budget is being viewed differently by other firearms enthusiasts.

Their attention now turns to what Abbott does during the period when he can veto line items in the budget.

Abbott touted the need to promote safe gun storage as part of his school safety proposals in the aftermath of the May 2018 shooting at Santa Fe High School that left 10 people dead and 13 wounded. And with a June 16 deadline to make vetoes, the governor is in a delicate position of trying not to alienate Texas gun-rights activists, while advancing a net of school safety reforms that the Legislature passed.

Texas budget writers authorized the $1 million for the Department of Public Safety to promote gun storage so long as it does “not convey a message that it is unlawful under state law to keep or store a firearm that is loaded or that is readily accessible for self-defense.” The campaign, unless vetoed by Abbott, could include online and printed materials, public service announcements or other advertising. House lawmakers first proposed the idea in a draft of the two-year budget in March, and it was approved by both chambers in May.

“It’s certainly fine and lawful to have a weapon for your own protection,” state Rep. John Zerwas, R-Richmond, the House’s lead budget writer, told The Texas Tribune. “But I think we also need to be aware that it’s not uncommon for a child to access a loaded weapon and inadvertently and accidentally hurt themselves.”

But as some gun rights groups criticize the state’s Republican leadership for not stopping the public awareness campaign — “Speaker [Dennis] Bonnen slipped a $1 million spending spree for the promotion of “safe” gun storage,” reads a news release from Texas Gun Rights. “The House and Senate failed to stop this budget rider,” says another one from Gun Owners of America — others have stayed neutral and say the line-item is small and noncontroversial.

“No ‘mandatory storage’ bill passed,” NRA spokeswoman Amy Hunter said. “What passed was a safe gun storage campaign rider that was just several lines in a nearly 1,000 page budget and NRA didn’t oppose it, not that anyone bothered to ask about our position.”

Still, the national gun advocacy group didn’t give it a full-throated endorsement.

“We’re not sure why $1 million of taxpayers’ dollars need to be used for such a campaign,” Hunter said. “The state can go ahead and do their thing, while we will continue leading the discussion with our own firearms safety training and accident prevention programs — again, at no cost to taxpayers.”

But smaller advocacy groups are hoping Abbott will come to their defense after a legislative session in which they say they failed to gain ground on key issues.

Among their grievances: A priority “constitutional carry” bill died. Two Democrats were tapped to chair the House committees that determined the fate of some of their most favored legislation. One of their own was publicly harangued by the House speaker after showing up in his neighborhood unannounced.

The public safety campaign, they say, was the final blow.

“The government doesn’t need to take every little issue upon themselves to make a public campaign,” said Derek Wills, the senior editor and podcast host for Lone Star Gun Rights. “Most gun owners prioritize firearms safety on their own, and will keep their weapons safely stored without a law — and definitely without a campaign from the state telling them they need to do that.”

Abbott has stayed largely silent on the budget item since Bonnen and Lt. Gov. Dan Patrick began receiving flak, and a spokesman for his office didn’t respond to a request for comment. Still, the governor has advocated for the promotion of safe storage practices — like locking away guns while they’re not in use — for at least a year.

In a 43-page school safety plan released shortly after the massacre at Santa Fe High, the governor touched on proposals like promoting the voluntary use of gun locks. He also toyed with the idea of having children younger than 18 counted as minors. Currently, Texas’ child-access prevention law only applies to those younger than 17.

Representatives for Bonnen and Patrick also didn’t respond to a request for comment, though Patrick has previously talked about the need for responsible gun storage.

“The responsibility of gun owners who have guns at home: Lock up your guns,” Patrick said last year. “I’m a gun owner. We have a responsibility to be sure our guns are safe at home. That’s where gun control starts — at home. Let’s make sure no kid gets his hands on a gun.”

In Texas, the governor has the authority to veto individual line items in the budget. And some political experts predict Abbott won’t be vulnerable politically should he decide to buck the groups asking him to cut the budget item.

“Second Amendment activists, they’re opinionated and they’re loud, but the NRA is the Good Housekeeping seal of approval on gun stuff,” said Bill Miller, a veteran political consultant and lobbyist who has represented both Democrats and Republicans. “And if they’re not opposed to this issue, I think Abbott is completely safe here.”

But in a gun-friendly state like Texas, some statewide grassroots groups say lawmakers stumbled this session. Aside from the $1 million cost associated with the campaign, some have argued that the language added to the state’s spending bill is eerily similar to a failed piece of legislation introduced this year — by a Democrat.

The bill by state Rep. Donna Howard, D-Austin, which was also opposed by the NRA, would’ve directed DPS — in conjunction with the Texas Department of State Health Services, the Parks and Wildlife Department and other relevant agencies — to develop and implement a public safety campaign designed to encourage firearm safety.

“We had this language negotiated on the House floor and in the budget conference committee,” Howard said of the proposal in the state budget. “It came out of the recommendations from the governor’s school safety plan, so it seems to me that this is something we ought to be able to move forward on that is a positive step.”

Several other bills this session aimed to strengthen the state’s gun storage laws, including a pair of bipartisan bills from state Sens. José Rodríguez, D-El Paso, and Joan Huffman, R-Houston, that would have increased the criminal penalties for making a firearm accessible to a child. Neither received a hearing.

“What happened with Second Amendment legislation this session was cringe-worthy,” Wills said.

Even gun control groups, though pleased with the budget rider, said they didn’t come out of this year’s legislative session on top — but still made measured progress.

“We had more bills filed to prevent gun violence, we had more hearings in committees, we had more discussions with lawmakers and more testimony,” said Ed Scruggs, the vice chair of Texas Gun Sense. “We’re on the playing field. We still have a long long way to go, but we’re having discussions about policy that we may not have had in previous years.”

But despite the show of support for the budget rider by the NRA and its Texas arm, the Texas State Rifle Association, and lawmakers of all political stripes, Wills said his group will still judge Abbott based on his action, or inaction, on the budget proposal.

“Whether he [axes it] or not is entirely his prerogative, and we will either support or oppose him depending on his actions,” Wills said.

Edgar Walters contributed to this report.

Disclosure: Bill Miller has been a financial supporter of The Texas Tribune, a nonprofit, nonpartisan news organization that is funded in part by donations from members, foundations and corporate sponsors. Financial supporters play no role in the Tribune’s journalism.