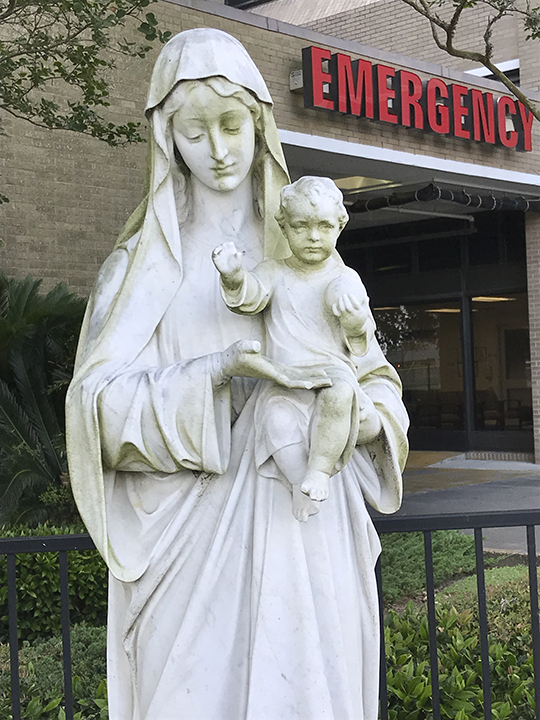 A statue of Mary and Jesus in front of the hospital emergency room. (Ken Stickney/The News)

Characterizing the hospital’s business model as unsustainable, Christus Southeast Texas Health System officials said the decision to close the 229-bed facility followed years of declining numbers for the hospital in general and for inpatient care in specific.

Some 120-130 full- and part-time employees and some 25 on-call workers will be affected. In an issued statement, the hospital said it would try to place those workers in the 70-75 open positions in the Christus system. Those who cannot be placed, they said, would be offered other assistance, including severance packages.

The announcement was made Monday in the Convent Chapel. Citing Old Testament scripture from Ecclesiastes 3:1 — “To every thing there is a season, and a time to every purpose under the heaven” — hospital and system leaders characterized the closure as the “next season,” with outpatient care at its Mid County facility at 365 and Ninth Avenue representing the future of healthcare delivery.

“It’s really about keeping people out of the hospital,” Trevino said of healthcare trends regionally and nationally. “Acute care is no longer the center of the universe.”

There were no inpatients at the campus Monday, for example, not a typical daily population but not far from it, said Dr. Kevin J. Roy, who has chaired the hospital board for the last three years. He said oftentimes there are only a couple of patients staying the night at St. Mary; 98 percent of the hospital’s traffic is in outpatient, emergency care. 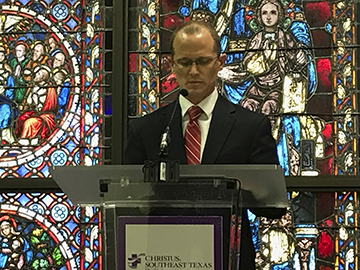 The campus includes three main buildings with a total of about 475,000 square feet. It opened in 1930, and hospital leaders said the infrastructure was aging and obsolete in light of healthcare trends.

Trevino said the hospital performs about $30 million a year in charitable services. That work, at the core of the hospital system’s mission, will continue.

“Since 2015, Christus Southeast Texas Health System has provided $545.3 million in charity care across Southeast Texas, with $88.1 million of that total attributed to the care specifically provided in South County in Port Arthur,” the hospital system said.

But Roy said that to provide charity care, the hospital needs paying customers, too. Those paying customers have migrated away from St. Mary’s location near the intersection of Ninth Avenue and Gulfway Drive, and closer toward the Mid County location.

The Christus Southeast Texas Maternity and Women’s Center, Christus Center for Health Management Clinic and Community Health Workers service now located at St. Mary “will be relocated and remain available to continue to serve those in Port Arthur,” Christus said in an issued news packet material. 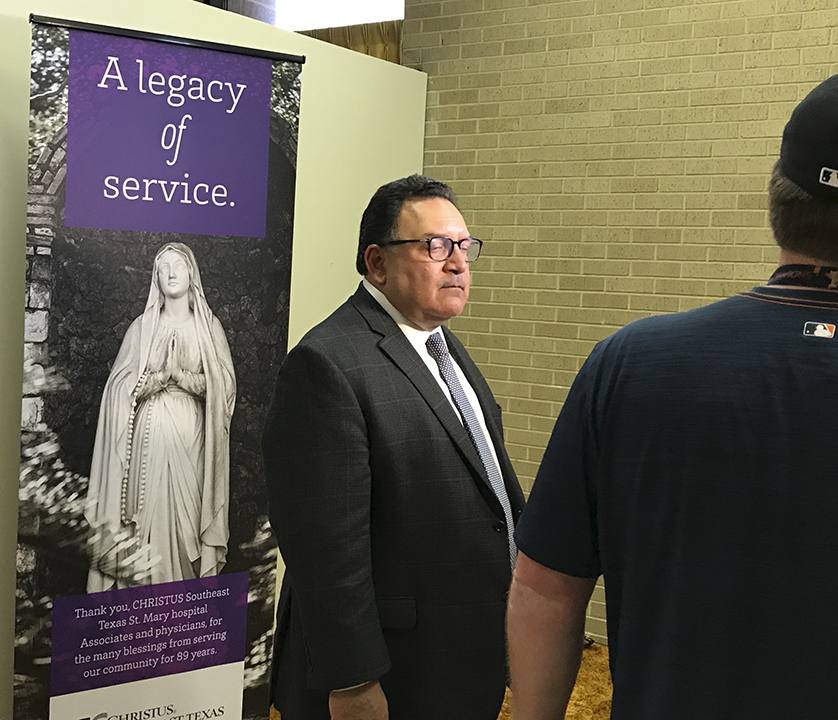 St. Mary Hospital was initiated in the late 1920s when the board of Mary Gates Memorial Hospital raised the possibility with the Sisters of Charity of the Incarnate Word, who had constructed hospitals and nursing schools in the area.

The Gates hospital donated equipment to the sisters; Travis Lambert donated the land on what was the Port Arthur-Beaumont Highway, the Port Arthur Centennial History said.

The sisters opened St. Mary School of Nursing in 1930, which operated there until 1957.

The hospital added intensive care services in 1966 and a coronary unit the following year. A west wing and later a south wing pushed capacity to 278 beds in 1983.

The hospital became part of Christus Health in 1999.

Hospital officials said if services became unsustainable before July 18 they would review the timeline.

See also: Gregory has volunteered at St. Mary for 49 years