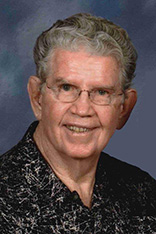 Mack Ross Estes of Ruston, Louisiana, went to see his Savior, Jesus Christ, with his passing, Sunday, June 2, 2019, surrounded by his loving family, wife Hilda Brazzel Estes and son, Stephen Clayton Estes of Houston, Texas. Funeral service will be held on Thursday, June 6, at 3:00 PM at Temple Baptist Church, 1515 South Service Road West, Ruston, Louisiana 71270, with visitation from 1:30 until time of service, followed by graveside services at Corinth Cemetery just outside of Dubach, Louisiana under the direction of Kilpatrick Funeral Home.

Mack was the son of the late Clayton Connard Estes and Nancy Jane Ross Estes. A native of Clyde, Texas, he moved to Orange, Texas as a teen and graduated from Lutcher Stark High School in 1946. He joined the Air Force, serving during the Korean Conflict. After an honorable discharge, he went to Sam Houston State University earning a bachelor of science degree and played football for the Bearkats. He married Margaret Jane Fisher, his wife of 19 years, by whom he was preceded in death.

Mack began a career in coaching that took him to Devine, Uvalde, Ingleside, Bridge City and Port Arthur, Texas. He served as both a head coach and assistant coach in football, baseball and other sports. He coached a literal all star cast of athletes and was proud of the many lives he was able to touch through coaching and teaching. He followed his coaching career with a successful career as a business man partnering with his brother Louis in Estes Sporting Goods and E & M Sports Center.

Mack was a passionate supporter of sports of all kinds, traveling the globe to Olympic Games, Super Bowls, All Star Games and all manner of sporting events.

Mack was very engaged with his faith as a member of Temple Baptist Church. He enjoyed spreading the gospel and studying God’s word. Mack was an active Deacon at First Baptist Church in Port Arthur, Texas.

After retiring, he moved to Ruston, Louisiana.  He was a member of Temple Baptist Church and was active in a number of charitable causes, too numerous to mention and was generous to a fault.

He is survived by his wife, Hilda Brazzel Estes, to which he was married to for 49 wonderful years. Her determination and love provided Mack great comfort and health in his final illness. Also surviving is his son Stephen Clayton Estes and wife Mary Colleen Estes and granddaughter Jill Estes Higginbotham and her husband Brian and two great-grandchildren, William and Hayes Higginbotham.

The family would like to express their gratitude to Mr. Estes’ caregivers Katherine and Bernice for their care and compassion throughout the year.

In lieu of flowers, memorials to Mr. Estes can be made to Alzheimer’s Association or the charity of your choice

Honorary Pallbearers are The Turtle Creek Coffee Group, The Lions Club, The Temple Sunday School Adult One Class and all of Coach Estes’ former Athletes.

Online condolences may be sent to the family at  www.kilpatrickfuneralhomes.com.