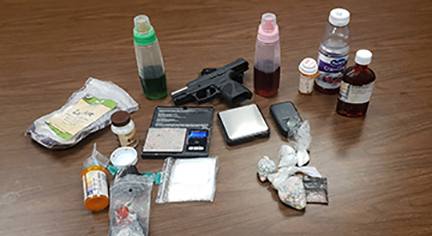 Drugs and a gun were reportedly found in the possession of a Dickinson, Texas man during a traffic stop on Monday. Photo courtesy of Jefferson County Sheriff’s Office

BEAUMONT — A Dickinson, Texas man who deputies said was found with a gun and drugs in his car reportedly had more drugs hidden in his shoes when he arrived at jail on Monday.

At about 12:35 p.m. Monday deputies with the Jefferson County Sheriff’s Office were working traffic at Interstate 10 at Smith Road eastbound when a Mercedes without license plates passed them, according to a press release from JSCO. 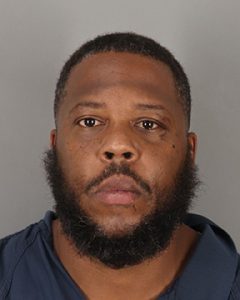 The vehicle was stopped and the driver, identified as Kenneth Jerrod Branch, 35, stated he had no drivers license and admitted he was a convicted felon and there was a loaded pistol near the front seat. He was detained for further investigation.

Then a JSCO K9 deputy and his partner arrived and the K9 gave a positive odor response when searching the exterior of the car. That’s when they discovered baggies of pills believed to be ecstasy, methamphetamine, cocaine and bottles of liquid codeine. Branch was arrested and brought to the Jefferson County Jail.

He was searched in the book-in area of the jail and reportedly had baggies in his shoes containing methamphetamine and cocaine.