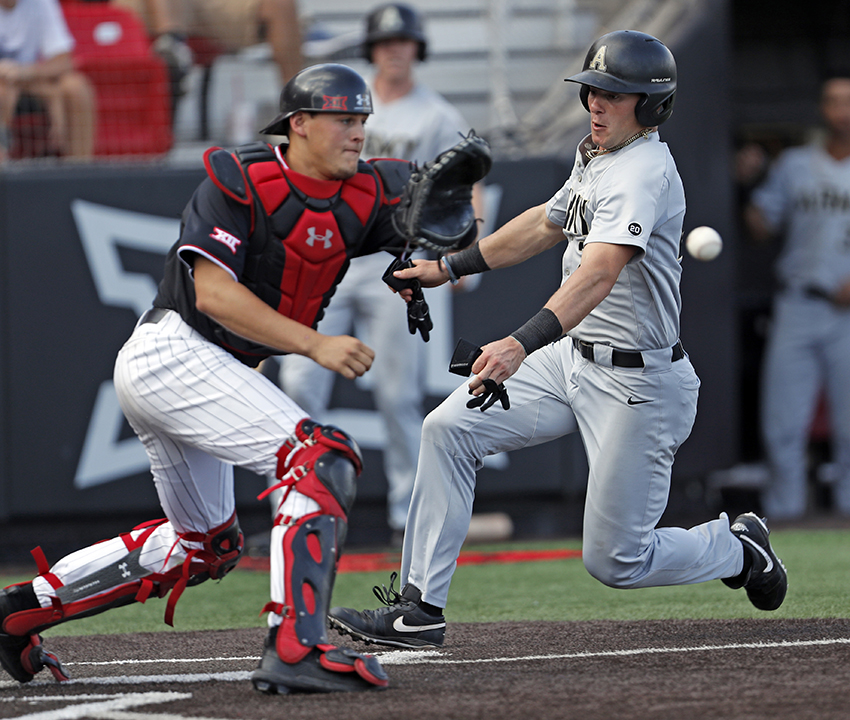 No. 3 was the place to be in the NCAA baseball regional seedings Friday.

Of 10 afternoon games matching second and third seeds, the lower seed won eight of them.

The only 2 seeds to win were Indiana State and Auburn.

No. 5 national seed Arkansas and No. 6 national seed Mississippi State made top regional seeds 2-0 in day games. The first round continued Friday night.

Florida State, one of the last four teams awarded at-large bids for the 64-team tournament, hit six homers in a 13-7 win over Florida Atlantic in Athens, Georgia. The Seminoles (37-21) have made the tournament all 40 years they’ve been coached by Mike Martin, who is retiring after the season, and 42 in a row overall. They need three more wins to extend their streak of winning at least 40 games every season under Martin, the all-time wins leader in all NCAA sports.

Duke, another one of the last four in, got a strong seven innings from Ben Gross and held on for an 8-5 win over Texas A&M in Morgantown, West Virginia.

Matt Wallner, Danny Lynch and Storme Cooper homered and combined for 10 RBIs to lead Southern Mississippi past Arizona State 15-3 in Baton Rouge, Louisiana. The 12-run loss was ASU’s most lopsided in the program’s 248 NCAA Tournament games and only the third by double digits.

Last year, No. 3 regional seeds went 7-9 in the first round.

WHO IS THIS GUY?

Florida State got a jolt from an unlikely source.

Tim Becker, a graduate student who played three seasons on FSU’s club team before earning a spot on the varsity at an open tryout last fall, hit two of the Seminoles’ six homers and drove in four runs to match his previous season total. He entered the game 8 for 32 for the season with no homers. He drew his fifth start in left field.

“That was surreal. Didn’t expect that, honestly,” Becker said. “Got to be ready when you get put into a big situation, and I did that today.”

Seminoles coach Mike Martin said Becker did everything right to merit his shot.

“It just goes to show you that all most of us want in life is an opportunity to show what we can do,” Martin said. “He kept getting better and all of a sudden I realized he’s a great teammate, he’s a tremendous young man. That’s how he got his opportunity to make the travel squad. Then he gets an opportunity to play.”

WELL, THAT’S ONE WAY TO DO IT

Nebraska’s 8-5 win over Connecticut might have been the most unconventional of the day. The Cornhuskers’ pitchers allowed 19 hits and their batters struck out 16 times. UConn had five doubles and a homer and at least two hits in every inning through the seventh. The Huskers turned four double plays to neutralize all that offense.

Dallas (6-0) allowed three hits and one unearned run in seven innings for the Red Raiders, who are seeded eighth nationally and hosting a regional for the fourth straight year. Texas Tech (40-17) clinched its fourth consecutive 40-win season.

Jacob Hurtubise broke up Dallas’ no-hit bid with a line drive just out of the right-hander’s reach into center field with one out in the sixth. Hurtubise scored on a double by Trey Martin.

The Golden Knights (35-25) dropped to 4-15 in NCAA regionals, including 1-7 since losing in the regional final at Texas in 2009. Army will face elimination against either Florida or Dallas Baptist.

Tanner O’Tremba had three hits and drove in three runs, including a two-run double for an 8-0 lead in the fifth. Brian Klein and Cody Masters had two RBIs apiece. Warren’s team-leading 15th homer capped the scoring for Texas Tech in the seventh.

MORGANTOWN, W.Va. — Erikson Nichols and Rudy Maxwell each hit three-run homers Friday and Duke held on to beat Texas A&M 8-5 in the opening game of the NCAA Morgantown regional.

Third-seeded Duke (32-25) is looking to reach the super regionals for the second straight year after capturing the regional last year in Athens, Georgia.

Duke starter Ben Gross (7-4) allowed one run and scattered four hits over seven innings. Second-seeded Texas A&M (37-22-1) scored four times in the ninth, but Ty Condel grounded out with two runners on base to end it.

Six of Duke’s 11 hits went for extra bases. Nichols and Kyle Gallagher each had three hits.

Duke added four runs in the eighth. Michael Rothenberg doubled and scored on a wild pitch by reliever Bryce Miller. Maxwell, a freshman, then hit a pinch-hit homer off Joseph Menefee.

Trevin Esquerra provided the go-ahead hit in the sixth inning when his double to right field was misplayed, allowing Brandon Shearer to score. Delgado, a freshman, then singled to drive in Esquerra.

Delgado also scored the Lions’ first run on Dylan Hirsch’s sacrifice fly in the second. Baylor tied it in their half of the inning when Andy Thomas led off with a double and scored on Davion Downey’s ground out.

Paiva, the West Coast Conference’s pitcher of the year, allowed four hits and struck out five. The senior threw 110 pitches, 75 strikes. Nick Frasso pitched a hitless 1 1/3 innings for the save.