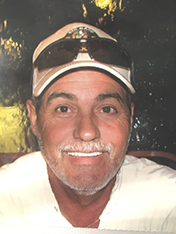 Ralph Alan Dupuy, Sr., 62, was born and raised in Port Arthur, Texas and passed away on Thursday, May 23, 2019 at his home surrounded by his loving family.

He was born on December 12, 1956 to his parents, John Dupuy, Sr. and Katie Latino Dupuy in Port Arthur, Texas. Ralph was an avid fisherman and hunter, loved his family deeply, and had an obsession for the outdoors. He was an independent distributor for Lance Snacks with over 15 years of service.

He was preceded in death by his parents and his brother, Jack Dupuy.

Ralph is survived by his loving wife, Jewel Castle Dupuy, his son, Ralph & Jessica Dupuy , his daughters, Christina Dupuy, Jaime & Robbie Abshire, and Jessica Dupuy along with nine grandchildren. He is also survived by his brothers, John & Sue Dupuy  and James Dupuy as well as several nieces and nephews.

Visitation will begin at 9:30 am  with a  rosary/Vigil service will be held at 10:00 am on Tuesday, May 28, 2019 in the Thompson Memorial Chapel at Clayton Thompson Funeral Home. A Service to honor his life will follow at 11:00.   Arrangements for cremation are entrusted to Clayton Thompson.