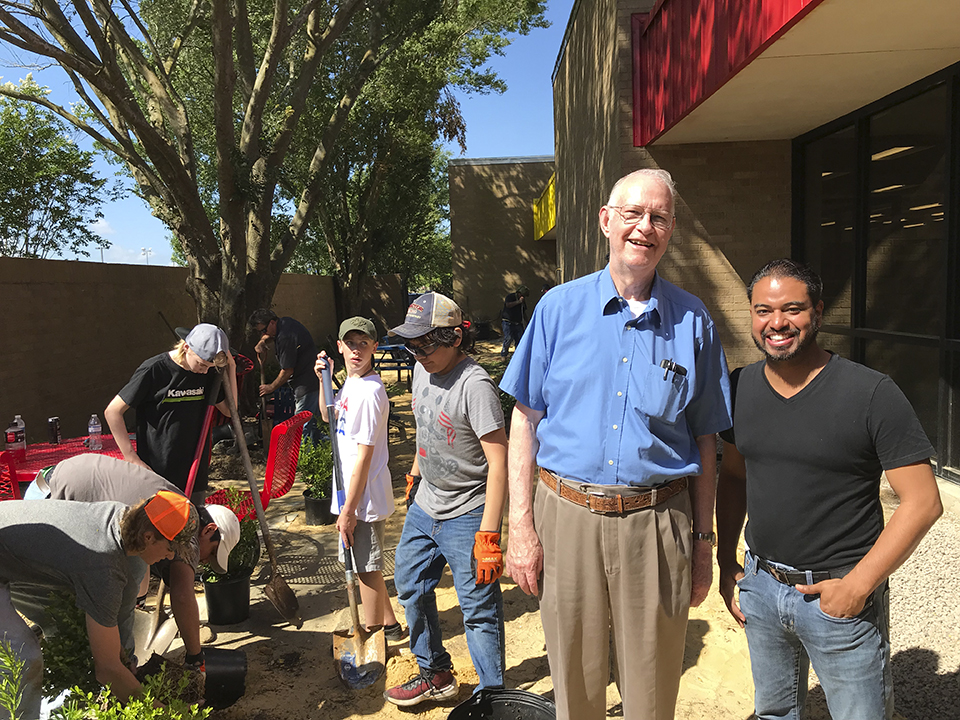 Ray Cline spent most of his 32 years at the Port Arthur Public Library inside the typically hushed building. Now he can use his outdoor voice.

Cline, library director from 1986-2005, will be honored Saturday — it will be proclaimed “Ray Cline Day” in the city — when the library dedicates the Ray Cline Courtyard adjacent to the library, located at 4615 Ninth Ave.

Cline worked 13 years as assistant director, 19 as director, and has volunteered at the library since his retirement. He serves as president of the Friends of the Library.

He said he was “floored” when he learned the courtyard would be named for him.

“It was a no-brainer to name it for Mr. Ray Cline,” said library director Steven Williams. “He still advocates for the library, and is still in the mix here.”

The library’s board agreed to name the courtyard for Cline at its March meeting, the City Council agree last week.

Cline, a native of Texline, northwest of Amarillo and a stone’s throw from New Mexico and Oklahoma, started his library career in 1973, straight out of library graduate school at the University of North Texas and following Army service. He earned his bachelor’s in business at what’s now West Texas A&M.

He brought his wife — Ray and Janet Cline have been married for 55 years — and one son to Port Arthur and remained; a second son was born here. Cline initially worked under director Lucy Steifel.

While Port Arthur was new to Cline in 1973, library work was not. He’d worked much of his young life in libraries, on staff or as a volunteer. He said he opted to not stay in the military as a career because he wanted stability for his family.

Initially, he worked at the Gates Library on Stilwell Boulevard until the city built the current library in 1980. The Gates Library now serves Lamar State College Port Arthur.

Cline hired Williams, then a high school student, as a student worker after the restaurant where Williams had worked as a server closed. Cline said Williams was their favorite server there.

“God puts people in your life,��� said Williams, who became director last year. “I would not be in my position without his mentorship.”

Williams worked his way up at the library in measured steps from student worker while earning his two-year and four-year degrees and then his master’s.

“It wasn’t on my mind that Steven would become director someday,” Cline said, “but I saw something in him, a quickness, that we needed in our student assistants.”

Cline said the library was built with a courtyard but that there had been vandalism there in the library’s earlier years. New security measures are being added.

The courtyard itself is being beautified as part of an Eagle Scout project undertaken by Troop 122 in Beaumont. Weston Connors, a rising senior at West Brook High School, is leading the project as part of his effort to qualify for Eagle Scout.

The scouts are planting Japanese boxwoods, butterfly weed silky scarlet, azaleas and more. The plants will attract butterflies and hummingbirds.

Some benches and furnishings are being added.

The library was flooding during Hurricane and Tropical Storm Harvey in summer 2017, and reopened in March.

See also: Editorial: Book it! This library will open