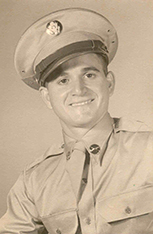 He was born on November 19, 1928 to his parents, Theodule Duhon and Eve Clark Duhon in Maurice, Louisiana.  Dennis was a resident of the area for over 65 years.  He served in the U. S. Army during the Korean War.  Dennis retired from Jefferson Chemical as a lab technician with over 35 years of service. He was a member of Immaculate Conception/St. Peter Catholic Church, a third degree member of the Knights of Columbus Council #3491 in Groves, a member of the Woodmen of the World.

He was preceded in death by his parents, his wife, Annie Lou Faulk Duhon, his son, Deny Duhon and his daughter, Janice Duhon.

Visitation will be on Thursday, May 30, 2019 from 10:00 am till 11:00 am at Clayton Thompson Funeral Home in Groves. Service to honor Dennis’s life will be at 11:00 am Thursday in the Thompson Memorial Chapel at Clayton Thompson. Burial will follow in Oak Bluff Memorial Park in Port Neches. Serving as pallbearers will be Michael Blanchard, Dylan Ward, Bill Redell, Cody Hollier, Corey Tibbitts, Tommy Seaux, Randy Warner and A. J. Faulk. Honorary Pallbearers will be Chris Rawlinson, Matt Miller and Dustin Stark