Going with the flow?: Mardi Gras turns toward Beaumont 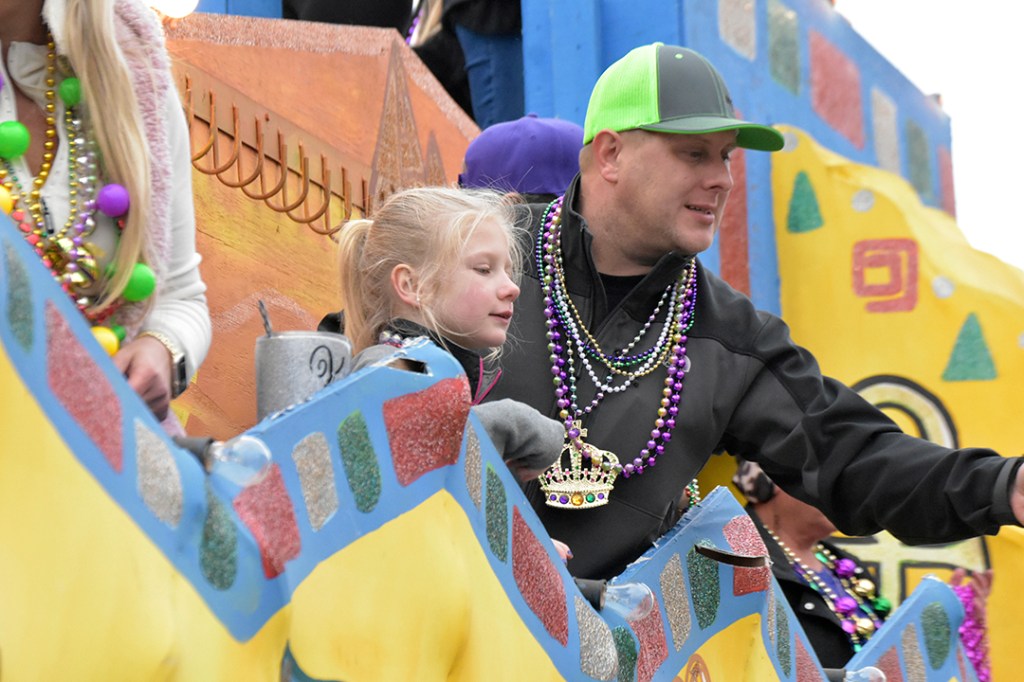 A scene from the 2019 Mardi Gras of Southeast Texas festivities in Port Arthur. (Mary Meaux/The News)

Mardi Gras of Southeast Texas is continuing its bid to find a new home and hopefully regain attendance to the festival.

Laura Childress, president of the organization, and City of Beaumont Event Coordinator Lenny Caballero met with Beaumont City Council earlier this week to answer questions in a meeting that was vastly different from one held in Port Neches City Hall in early April.

In Port Neches, a majority of residents who spoke opposed hosting the event in their town due to reasons that ranged from possible crime and drunkenness to traffic congestion.

While Beaumont’s meeting didn’t have residents asking the questions during the work session that is available on the city’s website, Mayor Becky Ames and some councilmembers did pose questions.

Childress requested for Beaumont to be the host city for the next annual four-day event to be held Feb. 20-23. She said MGSETX is mainly self-sufficient and pays for its own police, fire, permits, rentals and other items.

Caballero said the city does over 300 events per year and hosts large festivals such as the Americana Fest on the great lawn that features four stages, Oktoberfest, a jazz and blues fest and a heavily attended 4th of July event.

Councilmembers are aware that, while in Port Arthur, MGST has a number of parades but this is something that would work well in Beaumont, as the city is host to events with even more floats. And, if a big name, expensive, artist appeared and there was a rain out, some Beaumont venues could accommodate the act.

Big events tend to bring in tourists and this is something Beaumont hopes to see but the numbers for Port Arthur aren’t available.

“We know the hotels have been filling up in Port Arthur for several years but we have not done a true economic study since probably about 12 years ago, mainly because of the expense of it,” Childress said, adding that to get an exact number she could ask the Port Arthur Convention and Visitors Bureau.

Childress reminded councilmembers the name of the organization — Mardi Gras Southeast Texas — refers to a region and the event is made to draw from all regions.

MGST’s Port Arthur parades are about two miles long, something Beaumont officials said is workable there.

“We have two miles of road, as a matter of fact we have 753 miles left over if you want to keep going,” Councilman W.L. Pate said, with a laugh.

The parades, Childress said, are intended to be a free event for families who do not want to enter the gates, and, she added, the carnival is located outside the gates. One idea in Beaumont is to have children’s attractions, she said.

Councilwoman Robin Mouton asked about crime, saying the residents of the city do not want any more crime there but Childress reassured her the event is a safe, family event.

“We have been told (by police) it is a safe, non-eventual event as far as actual theft, crime, burglary of anything of that nature,” Childress said. “I would expect the same relationship with the (Beaumont) police department.”

The event was organized initially with seed money from Port Arthur. Eleven of the 14 nonprofits are located in Port Arthur.

Tim Romero with MGST said there have been several meetings with the city of Beaumont and the organization likes the direction the meetings have taken. Mardi Gras leaders are excited about potential for a partnership with Beaumont.

“This all boils down to a financial decision. We are trying to increase our attendance and feel like downtown Beaumont could hold the key,” Romero said. “They have accessible lots of parking, the event center area is beautiful and Beaumont owns most of the property down there.”

When MGSETX began in the early 1990s, downtown Port Arthur was pretty bare, which allowed organizers to block off several city blocks and have parades run down the middle of the street. But industry is buying up large, long vacant buildings in the heart of where the festival is held. Romero said he is pleased to see Port Arthur get this chance at redeveloping its downtown area and there are no ill feelings for the city that has hosted the festival for the past 27 years, he said.

“We have nothing against the city of Port Arthur. They have been a great partner of ours for 27 years,” he said. “If we do leave and go to Beaumont we are not leaving, stomping our feet, we are not mad.

“We are very appreciative of the partnership we’ve had of the past 27 years. There is an ebb and flow to life. This is just part of that flow.”